A scholar for the environment | Global News

A scholar for the environment 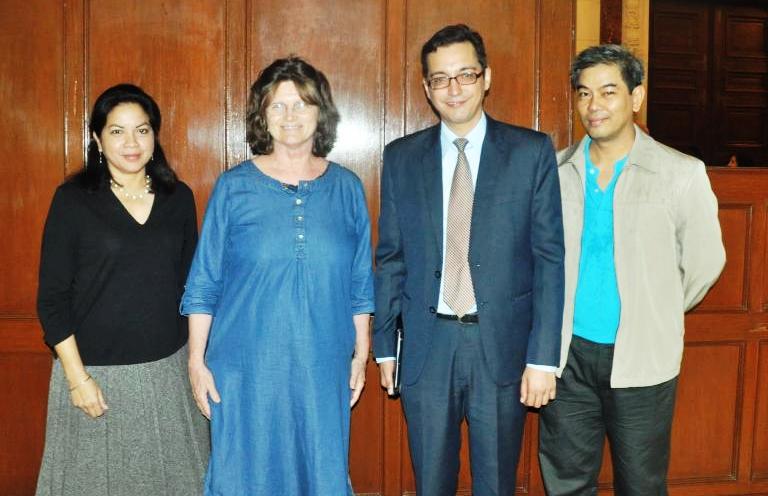 If majority of the Filipinos who are coming to US are migrating, some of them are sent there to study under scholarships both from the Philippines and the United States. Although many of them seek employment, some of them still come back to bring hope to the Philippines, not only to the people, but to the environment as well.

Arvin Cantor Diesmos, 44, of the Philippine National Museum is a Filipino scientist sent for a post-doctoral studies for a Senior Scholarship of Fulbright through the Philippine-American Foundation which enable him to do a research in the at the University of Kansas starting early 2013 until 2014. But as a senior scientist at the Herpetology Division of the National Museum, Diesmos is not only a student but a researcher and a scientist at the University of Kansas.

Aside from the University of Kansas, Diesmos is collaborating with Dr. Angel Alcala of Silliman University in Dumaguete for this endeavor.

A graduate of Biology from UP Los Banos, Diesmos also took his Masters of Science in UP and eventually finished his PhD at the National University of Singapore. On choosing herpetology as his field of expertise, “I have always dreamed of discovering a new species of a frog or a lizard or a snake. So, I chose this lesser known field,” Diesmos says.

Diesmos has discovered several new species of frogs, lizards and snakes all over the Philippines. Thus, in his honor, a new species of frog discovered in 2007 at Malinao Volcano in Bicol, is named after him, Platymantis diesmosi or the Mt. Malinao Cliff Frog, aside from that a lizard Parvoscincus arvindiesmos and also an earthworm, Pheretima diesmosi.

Herpetology is a study of reptiles and amphibians. Diesmos specialized in taxonomy or the naming of species and ecology. He says that Dr. Angel Alcala, the former DENR Secretary and Commissioner of CHED inspired him to become a herpetologist. Dr. Alcala is also a marine biologist.

“While he was still the DENR secretary, I sent him letters, introducing myself as a student with interest on amphibians and reptiles and my taking part in biodiversity expeditions in Sierra Madre. On my fifth letter, I was surprised that he took an effort to look for me. And that is the beginning of a long friendship and mentoring,” recalls Diesmos.

Aside from Alcala, Diesmos also cited Dr. Rafe Brown, a professor in Evolutionary Biology at the University of Kansas and an expert in Southeast Asian herpetology.

“Rafe taught me the basics of herpetology and I learned a lot from him, most especially on how to catch amphibians and reptiles in the field, and how to identify these animals taxonomically by examining morphological characters of each species. I am still associated with these fine gentlemen and we have been collaborating with each other for about 20 years now,” Diesmos explains.

Giving back to the environment and to the country

Studying abroad does not only mean giving back only to the Filipino people but most importantly to the environment, Diesmos believes. He said that they must contribute to national development by taking parts in efforts to enrich and advance scientific research in the country.

According to him, his study is very critical to the Philippine biodiversity and to the global context in general.  His researches will provide information on ways to formulate proper management of natural resources; identify best practices in environmental conservation; provide information that could generate revenues for tourism and to determine the value of biodiversity in terms of aesthetics, environmental services among other things.

On the possibility of brain drain like other Filipino scientists who left the country to pursue their careers abroad, Diesmos definitely will not follow their footsteps.

“I love this country, its biodiversity and its people,” he ends.