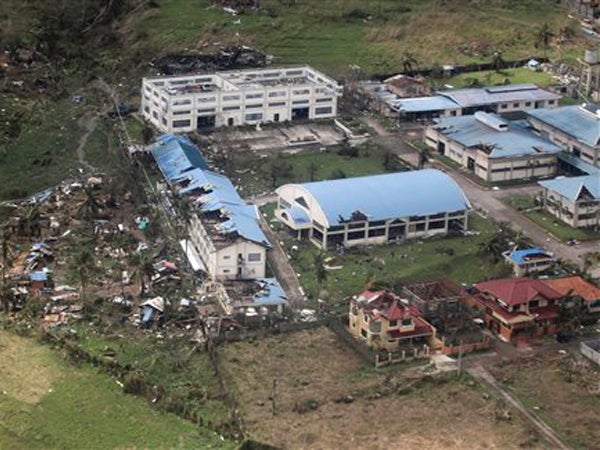 This photo released by the Malacanang Photo Bureau shows an aerial view of Tacloban city, Leyte province in central Philippines Sunday, Nov. 10, 2013, after Typhoon Haiyan ravaged the region in the Philippines. AP

MANILA, Philippines — Authorities were sure they had done enough to prevent mass casualties from Super Typhoon “Yolanda” (international name Haiyan), but with 10,000 people now feared dead experts say parts of the country may be helpless against relentless storms.

The Southeast Asian nation endures seemingly never-ending natural disasters, many of them deadly, and President Benigno Aquino has made saving lives a top priority of his administration by improving preparation strategies.

With nearly one million people evacuated from high-risk areas and a highly publicized alert system in place before Yolanda made landfall on Friday, Aquino’s aides expressed confidence that this time they were prepared.

But Haiyan turned out to be one of the strongest typhoons ever recorded, and sent waves up to five meters (17 feet) high hundreds of meters inland, wiping out entire communities.

More than 10,000 people are feared killed on one island alone, according to its regional police chief.

The International Organization for Migration (IOM) warned that the damage could even rival the 2010 earthquake in Haiti which left tens of thousands dead and whose effects are still being felt.

Nevertheless, experts said the extent of death and destruction was largely beyond the control of local authorities, which also meant the same problems could again lead to widespread carnage.

“This storm is unprecedented. Many things like this are outside of human intervention,” International Labor Organization country director Lawrence Jeff Johnson told AFP.

“They did what they could. There were a lot of lives saved. They evacuated many areas.”

Tacloban, the provincial capital of the central island of Leyte, is believed to have been among the worst hit, when storm surges swept away trees, trucks and houses throughout the city of 220,000 people.

Residents had nowhere to run

“With all these people, where could they have gone? If I was the governor, I could not have figured out how to relocate these people,” Loiz told AFP.

Officials said many residents had adhered to evacuation instructions, only to die in emergency centers where they were told they would be safe.

Reynaldo Balido, a spokesman for the National Disaster Risk Reduction Management Council, said schools and churches that had served as shelters in previous storms were destroyed by the tsunami-like waves.

“They followed instructions. The storm was too strong. Will you blame them for going to the wrong evacuation centers?” he said angrily in response to questions about why people in Tacloban were not protected.

Yolanda hit the Philippines as a category five storm with maximum sustained winds of 315 kilometers (195 miles) an hour — one of the most powerful ever recorded anywhere in the world.

“We never had a storm this strong. You can make preventive measures but you can never prepare enough for something so big,” he said on ABS-CBN television.

“If you really don’t want anyone to be hurt, (you have to) evacuate the whole province.”

One disaster after another for weary Philippines

“This is a very responsive and organized government, especially compared to others I cannot name for diplomatic reasons,” he said.

But he suggested that Philippine resources had been overstretched by one calamity after another.

They include Typhoon Bopha which left 1,900 people dead or missing in December last year, then a bloody three-week conflict in a southern city attacked by Muslim guerrillas in September, and a deadly 7.1-magnitude earthquake in October.

“The government was doing as much as it can. But how much can be done when disaster happens again and again?” he said.