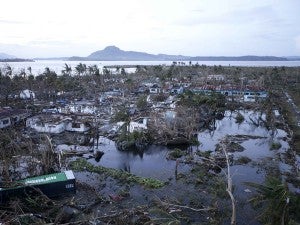 Tacloban city, devastated by powerful Typhoon Haiyan, is seen in Leyte province, central Philippines Saturday, Nov. 9, 2013. The central Philippine city of Tacloban was in ruins Saturday, a day after being ravaged by one of the strongest typhoons on record, as horrified residents spoke of storm surges as high as trees and authorities said they were expecting a “very high number of fatalities.” AP

LOS ANGELES — When typhoon “Maring” hit Luzon in August and an earthquake devastated parts of the Visayas two months later, Filipino-Americans planned fund drives and relief efforts to help the victims of both disasters.

Before the fund-raising took place, “supertyphoon Yolanda” (international name: Haiyan) wrought havoc in the Visayas, prompting organizers to broaden their focus to also meet the needs of those affected by the most recent tragedy.

A 5-kilometer walk in Van Nuys on Sunday (Monday in Manila) would also benefit victims of the supertyphoon, said Bing de la Vega, cofounder of the Philippine Disaster Relief Organization, which organized the event in partnership with the Romah Foundation.

The Philippine Consulate in Los Angeles has thrown its support behind the walk at Woodley and Balboa Park.

“Let’s offer the walk for our country,” said Consul General Hellen Barber-de la Vega, who called on members of hometown associations, professional organizations and youth groups to support the fund-raiser.

On November 15, a group of artists will come together in a benefit concert titled “Artists United: A Concert for Philippine Disaster Relief” at Bicycle Casino in Bell Gardens.

“This concert is a true testament to the power of conviction and collaboration.” said Ted Benito, executive director of the Apl.de.ap Foundation International. “It magnifies the compassion and bayanihan spirit [among] Filipinos and Filipino-Americans.”

It was originally planned to help the victims of the October 15 earthquake. The funds, to be raised through the Apl.de.ap Foundation International, will go to the Philippine Red Cross.

Concert director Rex Sampaga said the fund-raiser started “with one person wanting to help, then that person invited someone else and so on.”

“That’s what makes this concert unique… the spontaneity, plus the caliber of the artists who want to perform,” Sampaga said.

On the East Coast, Filipino-American groups scheduled benefit concerts this weekend in Alexandria and Virginia Beach. Both events were planned nearly three months ago to help victims of previous disasters, according to organizers.

“We’ve had so many calamities in the Philippines but [Yolanda] was the biggest of them all,” said Bing Branigin, spokesperson of the National Federation of Filipino-American Associations, which cosponsored the fundraiser in Alexandria.

Branigin said the Asia America Initiative already sent to the Philippines an emergency flight with $600,000 worth of medicines and medical supplies in response to the earthquake. “Now they have to broaden their focus to include the typhoon victims,” she said.

Another group, Gawad Kalinga USA, has started to accept donations to pay for 200,000 food packs to be distributed in the calamity areas.

‘We need to stay alive’