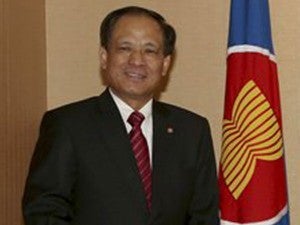 MANILA, Philippines — The Association of Southeast Nations has offered its support to the Philippine government following the devastation wrought by “supertyphoon Yolanda” (international name Haiyan) over the weekend.

In a statement posted on the Asean website, Asean secretary-general Le Luong Minh, also the Asean humanitarian assistance coordinator, said he has  informed Foreign Affairs Secretary Albert Del Rosario that he would be “ready to facilitate Asean cooperation and coordination through the Asean Coordinating Centre for Humanitarian Assistance on disaster management (AHA Centre).”

“The Asean stands shoulder-to-shoulder with the Philippines in these difficult times and we are ready to show the ASEAN spirit of a caring community to affected populations in the country. Within the framework of the Asean Agreement on Disaster Management and Emergency Response (AADMER), we are working closely with the AHA Centre to ensure ASEAN’s effective response to the disaster,” Minh added.

In a letter to Del Rosario, Minh expressed “great concern and sadness” over the devastation, as well as his “heartfelt sympathy with the affected communities and whole nation during these trying times.”

The AHA Centre has already deployed its team members and the ASEAN Emergency Rapid Assessment Team (ASEAN – ERAT) in Manila and Tacloban City to coordinate with the National Disaster Risk Reduction and Management Council authorities to discuss possible relief support for the Philippines.

The team in Tacloban helped set up emergency communications prior to the landfall of Haiyan (Yolanda) to help the disaster management office communicate with national government in earliest hours after the typhoon hit the city, the statement read.

On Sunday, an additional Asean group arrived in Tacloban to assess immediate assistance needed by the disaster management authorities and affected communities. The results of the assessment will be shared to Asean Member States and potential assisting entities to help them decide the types of assistance to be provided.

Meanwhile, the British Embassy Manila, in a statement on Sunday, said that the government and the people of the United Kingdom have been offering their “sincere condolences, support and friendship at this most trying time.”

“Yolanda is but the latest of a sequence of human and natural disasters to have hit the Philippines in recent months including floods in Mindanao and Luzon, the violence in Zamboanga and the earthquake in Bohol. Exceptional times require an exceptional response,” the embassy said.

“In addition to the £4 million (P276 million pesos) for the earlier emergency responses, Justine Greening, the UK’s Secretary for Overseas Development has announced (on Sunday) a further package of up to £ 6 million (P414 million) for the humanitarian response to Typhoon Yolanda,” it further stated.

10 deadliest natural disasters in the Philippines

We need to stay alive’