Glasnost at the Vatican? | Global News

Glasnost at the Vatican?

NEW YORK – A “small chapel” is how Pope Francis describes what the Roman Catholic Church might wind up becoming if it keeps playing the role of morally superior know-it-all. An exclusive fraternity, as opposed to being a truly catholic (in the sense of “universal”) body, seems to have been the obsession of the Roman Curia, a group of grumpy old men who berate the rest of us for being mere mortals. No matter that church doctrine hasn’t been affected (not yet, anyway) by the pope’s more relaxed outlook, this is a welcome change in tone from that of the former pope, Benedict, who lives in retirement, not far from where Francis lives.

One of my first thoughts on hearing of this pope’s desire to shift the conversation away from the Don’ts to the Do’s was that this was clearly an implied rebuke of the doctrinaire Benedict, nicknamed the rottweiler for his emphasis, equally true of John Paul, on dogma, on making sure that the musty air at the Vatican would continue to remain musty. Though he hasn’t commented on his successor’s views, Benedict must surely be having second thoughts about letting go of the papal reins. Sorry, Benedict, but to paraphrase that memorable graffito in a public restroom that I once saw, his karma ran over your dogma. 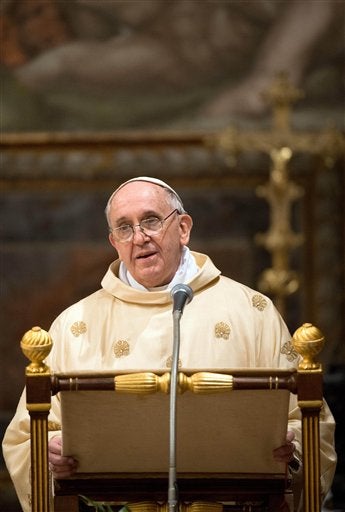 Not that dogma is dead, by any means. It still barks, bares its fangs, but perhaps not as loudly or as often as before. Francis is still doctrinally a conservative, and he made that point quite clearly when he recently spoke to an audience of Catholic gynecologists and reiterated the

Church’s stance against abortion, decrying what he termed today’s “throwaway culture.” He did so after an interview with him, by a fellow Jesuit and journalist, was published in various Jesuit publications. Pope Francis (the former Jorge Cardinal Mar

io Bergoglio from Buenos Aires) offered up a critique that must have shocked the Catolicos Cerrados—a peculiar specimen of which the Philippines has more, much more, than its fair share. I could hear their jaws dropping. For this alone I applaud him.

He noted how the institution had become obsessed with sexual matters such as gay marriage, contraception, and abortion. He pointed out that “It is not necessary to talk about these issues all the time. The dogmatic and moral teachings of the church are not all equivalent. The church’s pastoral ministry cannot be obsessed with the transmission of a disjointed multitude of doctrines to be imposed insistently.” He also stated that he might have been too hasty in his judgments when he was younger.

Is the Curia listening? While this body has no choice but to listen, the bigger question is, how will the members of this powerful body respond? Right now Dan Brown must already be contemplating yet another page-turner, where the shadowy figures behind the papal throne conspire to dispose of him.  This is a folksy pope who enjoys meeting people, someone who calls individuals popes never call—that’s folks like you and me—who drives around in a secondhand car, and who disdains living in the Apostolic Palace. He seems bent on undermining the autocratic Curia, or at the very least bringing a measure of transparency to its proceedings. It was precisely to shake the Curia up that he got the nod to be the CEO of a two-thousand-year-old institution.

How is our version of the Curia, the Catholic Bishops Conference of the Philippines (CBCP)—another bunch of grumpy men—reacting? For Francis’s desire to open up the doors as a gesture of a more inclusive church must make them hot under the collar, particularly in their wrongheaded opposition to, and mischaracterization of, the reproductive health bill, to the point of portraying it as Satanic.

Francis is New Testament, while the CBCP, as with the Curia, is so Old Testament, their deity that of fire and brimstone, God with the face of an avenger. This pope seems to favor the way that Jesus walked among the people, who talked to and hobnobbed with whores and thieves and fishermen and farmers, a Jesus who disdained the Pharisees and their fancy ways. He listened, and he understood. And in expressing views more in keeping with the times, Francis shows he is listening, and trying to stay away from the cold imperious judgment so favored by the conventional church hierarchy.

Interestingly, in an Associated Press dispatch, in interviews with Catholic laymen in places such as Havana, Boston, New York, and Manila, interviewees were overwhelmingly in favor of the pope’s approach. The one exception was—you guessed it—a Filipina, who insisted that the Church keep railing against abortion and homosexuality, yet at the same time she appreciated the pope’s outspokenness, a polite but dismissive gesture.

Still, the role of women in the RCC remains restricted, on weak theological grounds, as I have pointed out in earlier columns. If the church is to be truly inclusive, then its outdated views towards the half that holds up the sky must change. Pope Francis could be the agent of such change. His candid remarks have certainly encouraged Sister Carol Zinn, the head of the Leadership Conference of Women Religious, a nationwide organization of American nuns that had been severely criticized by Benedict for focusing on issues such as social justice. She lauded Francis’s gentler tone, and is optimistic that “we are going to see changes, because discernment brings changes.” Glasnost at the Vatican? One fervently hopes so.