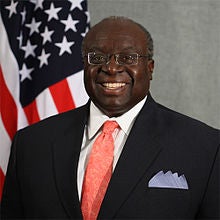 US Ambassador to the Philippines Harry K. Thomas Jr.

MANILA, Philippines – US Ambassador to the Philippines Harry K. Thomas Jr. said Tuesday that reports of corruption and violence in the country, particularly the Priority Development Assistance Fund (PDAF) scam and the ongoing standoff in Zamboanga City, will not, in any way, “affect” the strong US-Philippines ties.

In the launching of the Partnership for Growth (PFG) between the US and the Philippines, Thomas said the US government would continue to provide economic and trade assistance.

The US state will provide $434 million to cover additional job opportunities and promotion of good governance to help eliminate corruption in the country.

The US ambassador, at the Kapihan sa Embahada press forum Tuesday, said that the issue of corruption highlighted the need for the PFG.

On the damage inflicted in Zamboanga City by the ongoing fight between elements of the Moro National Liberation Front (MNLF) and government troops , Thomas said the US Embassy has set aside P28 million to aid affected communities.

“We will continue to work that issue in Mindanao [because] clearly, we condemn the violence by the MNLF and the Bangsamoro Islamic Liberation Front (BIFF) in the strongest terms. We call for an end to this. We call for an observation of human rights,” he said.

He also said that the US military has provided training to Filipino troops.

“Our Joint Special Operations Task Force Philippines has been training and advising the Philippine National Police (PNP) Special Action Forces (SAF) as well as the Armed Forces of the Philippines (AFP) SAF so they can take charge,” he added.

The PFG was signed by then US Secretary of State Hillary Clinton and Foreign Affairs (DFA) Secretary Albert Del Rosario in November 2011 to “fight corruption and enhance economic opportunities.”

US Embassy sends condolences to kin of Zambo attack victims