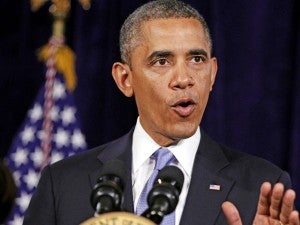 MANILA, Philippines—President Barack Obama is “very much looking forward” to his first trip to the Philippines, an opportunity to discuss the wide-ranging relationship between the United States and the Philippines with President Benigno Aquino III, according to the US ambassador in Manila.

US Ambassador to the Philippines Harry Thomas Jr. said that Obama’s visit to Manila on the second week of October was “being finalized,” as of Tuesday, as he cited the close working relationship between the US President and Aquino.

Obama is slated for a two-day visit in Manila on Oct. 11 and 12, the first for a US President since his predecessor George W. Bush held a whirlwind nine-hour visit here in October 2003.

The visit is part of a four-city swing through Southeast Asia, a trip that will also bring him to Brunei, Malaysia and Indonesia, where he had spent a few years growing up.

“We’re very pleased that the President is coming. As you know, he has very good relationship with President Aquino. You may recall that President Aquino was the first Asean President that Obama had discussions with,” said Thomas.

Obama, who began his first term as US President in 2009, and Aquino, who became Philippine President in 2010, have officially met at least three times: in New York in 2010 and 2011 and at the White House during the latter’s working visit in the US in 2012.

“I think that President Obama, who considers himself many things—African-American, Asian-American, Pacific Islander, who grew up partially in Indonesia—has a special affinity for this part of the world and is very much looking forward to this visit,” Thomas said at an Embassy forum in Makati City on Tuesday.

Discussions between the two leaders will cover not just military matters but also the economic and trade ties between Manila and Washington, an aspect of the bilateral relations where the Embassy hopes to focus amid the oft emphasized defense cooperation between the two countries.

This even as Manila and Washington continue discussions on an agreement for Increased Rotational Presence (IRP) of US troops in the Philippines amid the country’s external defense buildup.

Negotiations on the arrangement is ongoing, with the Philippine side reiterating that the talks will not result in a return of American bases in the Philippines, as prohibited by the Constitution.

Speaking of overall ties between the Philippines and the US, Thomas said: “This is not primarily a military relationship. This is an economic, trade and people-to-people relationship,” said Thomas, acknowledging he “could do a better job at explaining the depth and breadth” of US engagement in the Philippines.

He said that out of 30 US agencies at the US Embassy, only three have been working on defense. The Philippines is also one of only four countries in the world with which the US is pursuing its Partnership For Growth (PFG) program, a broad-based effort that seeks to enhance the country’s education, governance, justice and financial systems towards inclusive growth.

PFG’s bottomline, according to Thomas, is to bring development to the poor through job creation and curbs on underemployment by addressing the prevailing mismatch between workforce skills and industry demand.

“We all want the Philippines to become an Asian tiger. We want you to have a choice to go abroad, not a necessity. You lose so many talented people,” said Thomas.

One component of PFC is the $434-million five-year compact grant of the US Millennium Challenge Corporation for the Philippines, programmed for construction and rehabilitation of critical infrastructure and promoting good governance through a streamlined and improved tax administration at the Bureau of Internal Revenue.

Also part of the program is the gamut of projects the US Agency for International Development has been implementing across the Philippines, the US Department of Justice’s cooperation with its Philippine counterpart to declog the Philippine judiciary’s case backlog, and the US Treasury’s partnership with the Philippine Department of Budget and Management to standardize the payroll system in government.

The US is one of the Philippines’ biggest trading partners, with total bilateral trade of $17.6 billion in 2012, a 4.7 percent increase from 2011. It is also consistently the country’s biggest foreign investor, though the 2011 total of $5.6 billion (latest available data) is down 1.1 percent from the 2010 figure.