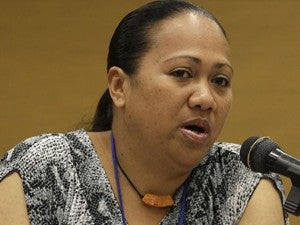 Palau fisheries official Nanette Malsol gestures as she answers questions from reporters before the opening of the 9th regular session of the Western and Central Pacific Fisheries Commission in suburban Manila on Sunday Dec. 2, 2012. Malsol said Asia and Pacific nations agreed at a meeting in the Philippines on Wednesday to take steps to protect whale sharks in a victory for the world’s largest fish. AP PHOTO/AARON FAVILA

MANILA, Philippines—Asia and Pacific nations agreed at a meeting in the Philippines on Wednesday to take steps to protect whale sharks in a victory for the world’s largest fish, officials said.

Western and Central Pacific Fisheries Commission nations agreed that tuna fishers must stop setting their nets around the vulnerable giants in order to catch smaller fish that gather underneath them, said Palau fishing official Nanette Malsol.

She said the deal binds tuna-fishing nations such as the United States, China and Japan, and was a victory for a coalition of small Pacific nations, called the Parties to the Nauru Agreement, that has been campaigning for this measure.

“This rule follows negotiations by the Parties to the Nauru Agreement for three years to try and get the big fishing nations to adopt protections for whale sharks,” said Malsol, who also heads the coalition.

The small Pacific island nations said they already imposed such a rule on their own tuna fishers.

Smaller fish like tuna congregate under whale sharks, so fishermen often seek the giants and set their nets under them to catch the other fish, said Angelo Villagomez, a spokesman of the US-based Pew Environment Group.

As a result, whale sharks, which are considered a vulnerable species, often get entangled in tuna nets and die, he said.

Fifty whale sharks were recorded having died from tuna nets in 2010 and 19 in 2011, said Villagomez, adding that there were likely many other cases that went unreported.

Parties to the agreement reached at the Manila meeting Wednesday must free any whale shark that gets caught in their nets and must also record and report any incidents involving the giant fish, Malsol said.

The Pew group, which is also attending the meeting, is pressing for other measures to protect 143 other threatened species of sharks that are affected by tuna fishers.

However, Villagomez said he doubted they would pass as some fishing countries actively catch these sharks.

Whale sharks measure as much as 12 meters (39 feet) long but are harmless to humans and feed on tiny marine animals. They have become popular tourist attractions in countries such as the Philippines, Mexico and Australia.