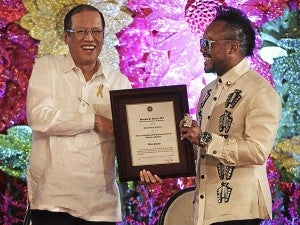 President Aquino Wednesday night expressed concern over reports of the high death toll and heavy damage wrought by Typhoon “Pablo” and exhorted successful Filipino professionals abroad to extend help to the hundreds of families grappling with its aftermath.

“I really had so much bad news today from the effects of Typhoon Pablo,” Mr. Aquino began his speech during the awarding of the Presidential Awards for Filipino Individuals and Organizations Overseas at Rizal Hall in Malacañang, adding that “the numbers seemed to be alarming.”

“Hopefully, they were erroneous numbers which will be corrected soon,” he added.

The President praised awardee Allan “Apl.de.Ap” Pineda of the Black Eyed Peas for performing “Bebot” that “lifted us up.”

With the typhoon taking its toll despite the preparations and preemptive evacuation, the President aired this appeal to the awardees: “Lend a helping hand.”

“I’m happy to say that we have made progress in how we anticipate and respond to natural disasters. Just as the government has become proactive, I’ve seen a greater spirit  of cooperation among Filipino citizens,” he said.

Of the three, only Pineda turned up. They were recipients of the Pamana ng Pilipino Awards, which recognizes Filipinos who have brought honor and recognition to the country through their profession.

Filipinos or associations who contributed to the promotion and advancement of interests of Filipino communities received the Banaag Awards.

Neurosurgeon Dr. Manuel Cacdac, Dr. Christopher Guerrero and the Aguman Kapampangan UK received the Lingkod sa Kapwa Filipino Awards for their exceptional contribution to the progress and development in the country.