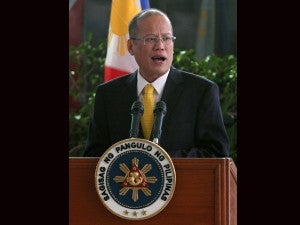 President Benigno Aquino on Wednesday night stressed the sovereignty of the Philippines over disputed territories in the West Philippine Sea at an event attended by the Chinese ambassador to Manila.

The event celebrated the 114th anniversary of Philippine independence and the country’s friendship and diplomatic relations with China, now on its 37th year.

In his speech, President Aquino said: “We must continue this partnership. After all, while we do enjoy the success we’ve worked for, we are still confronted by a number of challenges. We need to stand together as we look toward the future.”

He went on: “I know many here are concerned about the situation in the West Philippine Sea. Both the Philippines and China are exerting efforts to resolve the situation peacefully through diplomatic means. However, I must emphasize that I have taken an oath to defend the Constitution and the sovereignty and territorial integrity of the Republic.”

The extent of Philippine territory and maritime zones, Mr. Aquino said, are “clearly defined by Philippine laws and international law, specifically the 1982 United Nations Convention on the Law of the Seas.”

As members of the international community, Mr. Aquino said, China and the Philippines “owe each other mutual respect of our respective sovereignty under international law.”

He said both sides  had “gained momentum toward resolving” their dispute. They must maintain that momentum, he said.

“After all, our countries both recognize that peace and stability in the region will redound to benefits not only to us but to the rest of world,” Mr. Aquino said.

“(As) we celebrate the 11th Filipino-Chinese Friendship Day, we are reminded of the fact that the promise of mutual prosperity remains within our grasp,” he said.

“The Chinese side values its traditional friendship with the Philippines and stands ready to work with the Philippine side to focus on the present while facing a long-term perspective, overcome difficulties and remove disturbances,” Hu said.

Hu called for efforts “to realize lasting, sound development of the relationship between China and the Philippines on the basis of mutual respect, equality and mutual benefit.”

The FFCCCII during the event turned over a donation of P2 million to the PNP Foundation Inc.  The donation completes the federation’s pledge of P5 million for the foundation’s various programs.

The FFCCCII and other Chinese-Filipino organizations also turned over 400 housing units as donations to the victims of Tropical Storm “Sendong” in the cities of Cagayan de Oro and Iligan in Mindanao.

The housing project has been dubbed the Filipino-Chinese Friendship Village.