Pentagon: US to equip Philippines with powerful radar 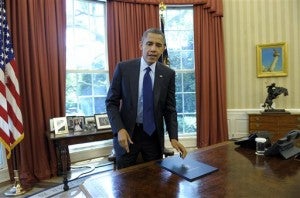 Plans to provide a powerful radar to the Philippines came after President Benigno Aquino met with US President Barack Obama at the White House, where the Philippine leader was offered a robust show of military and economic support. AP Photo/Susan Walsh

WASHINGTON—The US military on Tuesday said it planned to provide a powerful land-based radar to the Philippines as the country faced an escalating dispute with China over territorial rights in the West Philippine Sea (South China Sea).

The radar system will form part of a “watch center” that will track ships off the Philippine archipelago’s coastline, according to a Pentagon spokesperson.

“We are in the initial planning stages of assisting the Philippines with a National Coast Watch Center,” Major Catherine Wilkinson told Agence France Presse.

“This center will improve the Philippine maritime domain awareness of a breadth of security issues including countering the proliferation of WMD (weapons of mass destruction) to countering illegal smuggling,” Wilkinson said.

The cost and the timeline for the project were still being worked out, she said.

Plans to provide a powerful radar to the Philippines came after President Benigno Aquino met with US President Barack Obama at the White House, where the Philippine leader was offered a robust show of military and economic support.

Manila has asked for the radar system and other military assistance to bolster its position in a row with Beijing over Scarborough (Panatag) Shoal, which lies near the main Philippine island of Luzon.

The plan to provide Manila with a radar system reflects Washington’s strategic pivot to Asia amid escalating tensions in the strategic waterway which is believed to contain vast oil and gas deposits, analysts said.

“Land-based radar is one of the practical ways the United States can simultaneously boost Philippine defense capabilities and signal Washington’s long-term commitment to Asia,” said Patrick Cronin, senior adviser for Asia at the Center for a New American Security, a Washington think tank.

China may choose to defuse tensions just before a gathering of the 10-member Association of Southeast Asian Nations next month, Cronin said.

“But it is also possible that China is determined to humiliate the Philippines and, indirectly, the United States,” he added.

The Philippines has also expressed interest in patrol vessels and aircraft to help monitor the vast waters off its coast, where the Chinese have sent ships to assert their territorial claims.

It was unlikely the United States would provide military aircraft to the Philippines at a time when China may be preparing a conciliatory gesture, Cronin said.

“If China persists with embarrassing the Philippines, then I have no doubt aircraft sales will follow,” he said.

Admiral Cecil Haney, the commander of the Pacific Fleet, on Monday said the US Navy would be sending its most advanced warships, submarines and fighter jets to the Asia-Pacific region as China modernized its own naval forces at breakneck speed.

Haney mentioned the Littoral Combat Ship that could operate in shallower waters than other vessels, the EA-18G plane that could jam enemy air defenses and fly faster than the speed of sound, and the US Navy’s most advanced submarine—the Virginia-class.

Amid rising tensions in the West Philippine Sea, China’s state-controlled media and online military websites reported last week that the first of a new class of a stealthy littoral combat frigate, the type 056, had been launched at Shanghai’s Hudong shipyard with three others under construction.

According to analysts, the new 1,700-ton ship, armed with a 76mm main gun, missiles and antisubmarine torpedoes, would easily outgun the warships of rival claimants in the strategic waterway, according to the analysts. AFP