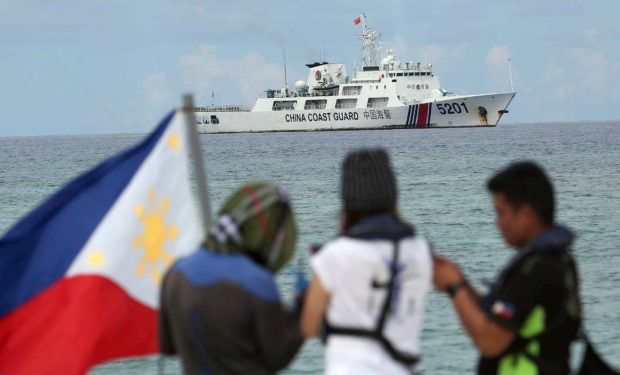 SEA ENCOUNTER | In this June 27 photo, Philippine Navy personnel display a Philippine flag during a trip to Sandy Cay, a sandbar 7.4 kilometers from Pag-asa Island in the West Philippine Sea, where a number of Chinese ships have been seen. (File photo by MARIANNE BERMUDEZ / Philippine Daily Inquirer)

MANILA, Philippines — Chinese maritime militia vessels posing as fishing boats are edging closer to Palawan as part of a ploy to restrict access by Filipinos to key areas in the West Philippine Sea (WPS), according to a maritime law expert.

Jay Batongbacal, a maritime law professor at the University of the Philippines, on Wednesday said the Chinese maritime militia anchored at Iroquois Reef and Sabina Shoal could quickly interdict Philippine ships sailing out to fish, resupplying Filipino military outposts or exploring for oil and gas off Palawan.

“These vessels are therefore part of Chinese activities to eventually cut the Philippines off from the West Philippine Sea,” he said in a Facebook post on Wednesday in reaction to the Inquirer’s report on the “swarming presence” of Chinese militia vessels at Iroquois and Sabina.

The reef and the shoal are within the country’s 370-kilometer exclusive economic zone (EEZ) and are much closer to Palawan than Julian Felipe (Whitsun) Reef, where the Chinese militia fleet have remained since last year despite protests from the Philippines.

Iroquois is 237 km from Rizal, Palawan, while Sabina is 135 km away. But Batongbacal pointed out that the reef is 37 km from Philippine-held Lawak (Nanshan) and Patag (Flat) Island outposts in the Kalayaan Island Group, while the shoal is 65 km from BRP Sierra Madre, a decrepit Navy ship serving as an outpost at Ayungin (Second Thomas) Shoal.

“From these locations, the Chinese maritime militia can intercept Philippine vessels on their way to our outposts from either southern or northern Palawan,” he said, adding that they could also “passively intimidate or actively force” Filipinos from fishing in these areas.

Their positions likewise give them an advantage to intervene in Philippine petroleum explorations at Service Contract (SC) 72 in Recto (Reed) Bank and at SC 75 in northwest Palawan, Batongbacal said.

Both areas are within the country’s EEZ, where the Philippines has sovereign or exclusive rights to exploit and explore resources.

The Duterte administration had canceled talks on oil and gas exploration with China, citing constitutional limits and sovereignty issues. President Marcos recently said Manila was looking for other ways to explore resources as the maritime dispute with Beijing had become a “roadblock.”

The government firmly asserts that any joint energy exploration must comply with Philippine laws.

Commenting on the Asia Maritime Transparency Initiative’s report on the deployment of the Chinese maritime militia to “key features” in the West Philippine Sea, Western Command chief Vice Adm. Alberto Carlos on Tuesday confirmed the “swarming presence” of the Chinese vessels at Iroquois and Sabina in recent months.

In a brazen encroachment in 1994, the Chinese started occupying Panganiban (Mischief) Reef, 239 km from Palawan, where they built “fishermen’s shelters.”

Beijing transformed the reef into the largest of its seven man-made islands, complete with military facilities, barracks and airstrip.

Sen. Francis Tolentino on Wednesday expressed exasperation over the repeated protests by the Philippines against China’s incursions and harassment of Filipino fishermen.

He asked the new Philippine ambassador to China, Jaime FlorCruz, how long the Philippines could maintain its “diplomatic patience and tolerance” toward Beijing.

“If you wish me to answer as a Filipino, I wish (the incursions) would stop today. I wish it will not happen again and I wish that we would be respected as a nation, our sovereignty will be respected,” FlorCruz said.

But he said the Armed Forces of the Philippines must also step up its visibility in the West Philippine Sea to send the message that the Philippines was asserting its rights over these waters.

Like his predecessor, the late Chito Santa Romana, FlorCruz was also a former activist who went into exile in China where he lived for 48 years, and later became a journalist who served as bureau chief of Time Magazine and CNN in Beijing.

FlorCruz said he would handle problems with China through the foreign policy spelled out by President Marcos—“a friend to all, an enemy to none.”

China claims nearly all of the South China Sea, including the West Philippine Sea, putting it in a maritime dispute not only with the Philippines but also with Brunei, Indonesia, Malaysia, Taiwan and Vietnam.

A July 2016 ruling by an international arbitral tribunal invalidated China’s sweeping claims and upheld Philippine rights over its EEZ.

Members of the Association of Southeast Asian Nations (Asean) and China are trying to formulate a binding Code of Conduct on the South China Sea (COC) to avoid escalating tension as they settle their conflicting claims.

Foreign Deputy Assistant Secretary Noel Novico told reporters on Tuesday on the sidelines of the two-day Asean Maritime Forum (AMF) that no deadline for the COC had been set although the “second reading” of the proposed code was nearing conclusion.

An Expanded AMF with several other countries, including China, the United States, Australia, Japan and France, was held on Wednesday.

—WITH REPORTS FROM MELVIN GASCON AND JACOB LAZARO

China says it drove away US cruiser near Spratly Islands