Democracy is defined by status of women in society, says VP Harris

United States Vice President Kamala Harris said this as she spoke before representatives of various Filipino women’s groups at a town hall meeting in Sofitel Philippine Plaza, Pasay City, on Monday to amplify her call for women to participate in economic activities and engage in civil society.

In the discussion moderated by US Ambassador to the Philippines MaryKay Carlson, Harris – the first female and woman of color to clinch the US vice presidency – said democracies are measured by how women are doing in society.

Harris added: “But always, I approach this from a perspective of believing that anything and everything is possible as long as we have the courage and ability to articulate what is wrong and what the solution looks like.”

She pointed out that in many issues of inequities and other differences, the solutions are very straightforward.

Harris also underscored the importance of uplifting the economic well-being of women by giving them access to capital, and freeing them from fear and violence.

She acknowledged the need to give equal economic opportunities to individuals across all genders, particularly in providing access to financial literacy, banking systems, capital for businesses, and “all of those things that are absolutely critical to be able to have a good idea, have a vision, have a dream.”

Harris then spotlighted the ripple effect on families, communities, and societies once hard work is exerted to uplift and implement a woman’s vision.

But she then floated a question about how this goal might be achieved.

In a seeming response to her own question, Harris said that giving women access to capital is only one action point to take.

Eliminating fear of violence and fear of fear itself is another, she added.

She further insisted that “there is a connection between what should be the human right to live free from fear, to live in a safe situation, that allows one to then thrive around things like having an idea, being innovative. To be able to start something and grow it.”

Citing data and observations acquired from her work as a prosecutor, Harris pinned a “real correlation” between violence against women and children, and the economic status of women.

“The reality of it is, women will endure almost any form of abuse if it means keeping a roof over the heads of their children and being able to feed them. But that choice doesn’t have to be made. Because if she has an individual opportunity to achieve economic well-being, it is likely she will remain in an environment or situation that otherwise causes her harm,” she said.

Women’s seat at the table of leaders

“It is so important,” Harris said when asked about the importance of women in leadership positions.

Taking a piece from the advice she got from her mother, she said: “One of the ways that I think about a role of leadership is to understand that we will all…likely be the first or the only one in the room. And it is important to know that the responsibility we have is to not be the last. To chart a course where others can follow.”

Harris pointed out that while it is commendable for women to be in leadership moments where they feel they are the only one thinking, speaking, and fighting for their beliefs and advocacies, she said they are also entrusted with the responsibility of owning their voice and speaking with authority.

“Because half of that is knowing that what you are thinking and what you are feeling is legitimate and important, and it must be heard. And in that way, it’s bigger than you,” she stressed.

Harris then encouraged young, emerging leaders to keep in mind that they are standing on the shoulders of those who came before them.

“Part of what you must remember is there are people who came before you. Who charted a course for you to pick up the mantle,” she said, citing Josefa Escoda, Concepcion Calderon, and Cory Aquino as examples of young Filipina leaders in history.

“The people who are heroes, whatever gender they are, they ran their part of the race, and then they passed the baton. And the question is, what will we do with the time we carry the baton?”

Harris spoke before an audience of students, young professionals, Filipino alumni of US universities, and representatives from civil society groups forwarding women’s rights, according to the US Embassy in the Philippines. 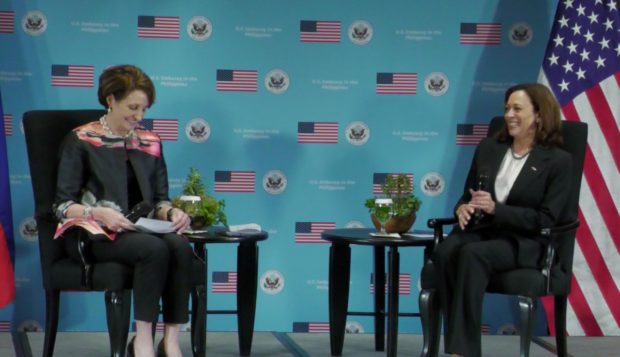 A senior US administration official earlier said Harris’ moderated discussion with Filipino women was in line with her advocacy of discussing gender issues and empowering women across the globe.

“This will be the first event of its kind she has done overseas since taking office, and it’ll be a good opportunity for direct engagement with the Filipino people, underscoring the strong people-to-people ties with the Philippines and historic ties,” the official said in a background press call with the White House last week.

Among the US initiatives Harris brought a $5.5 million loan guarantee pledge of the US International Finance Corporation, through an agreement with Citibank, to support the non-profit and non-stock microfinance corporation ASA Philippines, which provides women entrepreneurs with access to capital.

Harris, the highest-ranking US official to have visited the country under the Marcos administration, arrived in Manila on Sunday night with her husband, lawyer Doug Emhoff.

Harris has since met with her Philippine counterpart Sara Duterte before proceeding to Malacañang to speak with President Ferdinand Marcos Jr. on further bolstering the security and economic ties between both nations.

She reaffirmed the US government’s commitment to helping the country defend its claim in the West Philippine Sea, should its tensions with China escalate and lead to an armed attack.

Before Harris, the last top White House official to visit the Philippines was former US President Donald Trump in 2017.

Explainer: Why US seeks closer security cooperation with the Philippines

Your subscription could not be saved. Please try again.
Your subscription has been successful.
Read Next
Marcos tells US VP Harris: Filipinos celebrate Christmas like we invented it
EDITORS' PICK
House energy committee chair Arroyo bats for cheap electricity
ACT slams Edca on 124th anniversary of PH-American war: ‘Tila hindi umalis ang mananakop’
Philippines central bank to focus on inflation at next policy meeting – governor
Omega Speedmaster super racing: Tiny device massive change
vivo Philippines offers a free bouquet of flowers and a premium necklace perfect for Valentine’s Day
Only 38% of students grade 1 to 3 prefer local language as medium of instruction — Pulse Asia
MOST READ
Pokwang admits she lied about cause of split with Lee O’Brian: ‘Umasa akong aayusin pa niya’
Vice Ganda asserts all is well with Karylle, takes swipe at ‘kuya’ who chimed in to be ‘trending’
Immigration detention head, 35 others sacked over foreign detainees’ VIP treatment
OWWA chief Arnell Ignacio: Socmed manager behind post on my love life
Don't miss out on the latest news and information.