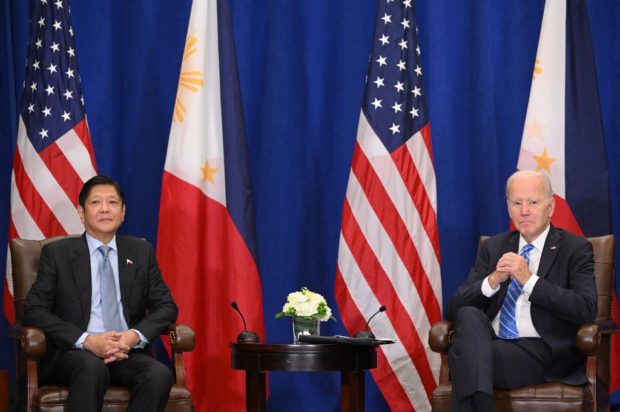 US President Joe Biden meets with Philippine President Ferdinand Marcos, Jr., on the sidelines of the UN General Assembly in New York City on September 22, 2022. (Photo by MANDEL NGAN /AFP)

Marcos is on a six-day working visit to the US for the United Nations General Assembly and other engagements with the business sector and the Filipino community. The president and the Philippine delegation arrived in New Jersey on Sunday, US time.

“To borrow a term from America’s favorite pastime, the President has hit a home run,” Zubiri said in a statement.

“His message that the Philippines is back in business resonated well, whether in his meetings with business movers or his one-on-one with [President Joe] Biden, either in the stock exchange or in the United Nations,” he added.

According to the senator, Marcos’ visit is the kind of diplomacy that will result in “tremendous dividends.”

“As the world emerges from the pandemic, there is keen competition for products, the need to boost trade and to expand markets. Luckily for us, we have a great salesman in the person of the President,” Zubiri said.

The US, an important ally

Meanwhile, Senator Francis Tolentino expressed support for Marcos’ remark that the US is an important ally of the Philippines.

“I support President Marcos’ recognition of the United States as our most important economic and defense ally,” Tolentino, vice chairman of the Senate committee on foreign relations, said in a separate statement Friday.

He added that Marcos’ recognition of the US as an ally is not a “pivot” from the apparent leaning of the previous administration — led by former President Rodrigo Duterte — to China and Russia.

“This is not a ‘pivot,’ as this mirrors chronicled and deeply-rooted bonds between Filipinos and Americans. There has never been a shift insofar as our historical alliance with the United States is concerned,” he said.

“The previous administration’s ‘recalibrated’ relations with other countries is part of the dynamics of evolving diplomacy wherein the interests of the nation is always primordial,” he continued.

Further, Tolentino said that Marcos’ visit should signal a strengthened robust economic, military, and people-to-people partnership with the US.