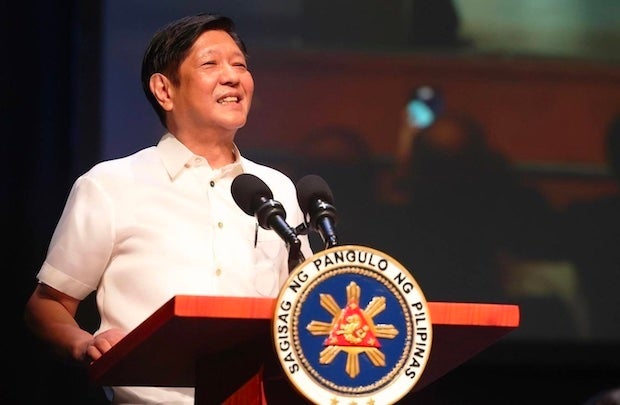 President Ferdinand Marcos beams as he addresses members of the Filipino community in Singapore on Tuesday, Sept. 6, 2022. (File photo from his Facebook account)

NEW YORK CITY, United States— President Ferdinand “Bongbong” Marcos Jr. arrived on Sunday at the Newark Liberty International Airport in New Jersey for a six-day working visit to the United States, his first time to set foot there as the Philippines’ chief executive.

He and the Philippine delegation arrived at the Newark Liberty International Airport in New Jersey at 11:53 a.m. (EST | 11:53 p.m. PST).

They were welcomed by Philippine Ambassador to the US Jose Manuel Romualdez and Permanent Representative of the Philippines to the United Nations Antonio Manuel Lagdameo.

Marcos will meet with the Filipino community in the afternoon at the New Jersey Performing Arts Center, where around 1,200 Filipinos are expected to attend.

In the following days, he will also meet with several world leaders and US businessmen and speak before economic briefings in New York City.

Marcos is scheduled to speak before the United Nations 77th General Assembly on Tuesday, Sept. 20.

He will be the second to speak in the afternoon session of the UN high-level General Debate, which starts at 3 p.m.

His predecessor, Rodrigo Duterte, spoke at the debate only through pre-recorded videos.

During his departure speech in Manila, Marcos said he would bring up “economic recovery, food security, and agricultural productivity” during his speech.

Leaders are given 15 minutes to speak during the high-level debate, but they are allowed to exceed that limit.

Brazil is always the first to speak during the General Debate, which starts in the morning – a tradition that started in 1995 during the 10th session of the General Assembly.

The United States, as the host country, is always the second to speak.

Malacañang has not yet disclosed whom Marcos will be meeting with during his working visit to New York.

However, the Department of Foreign Affairs earlier said consultations were ongoing for a possible meeting between Marcos and US President Joe Biden.

The president and his delegation will stay here until Friday, Sept. 23, Then will depart for Manila where they are expected to arrive on Saturday, Sept. 24.