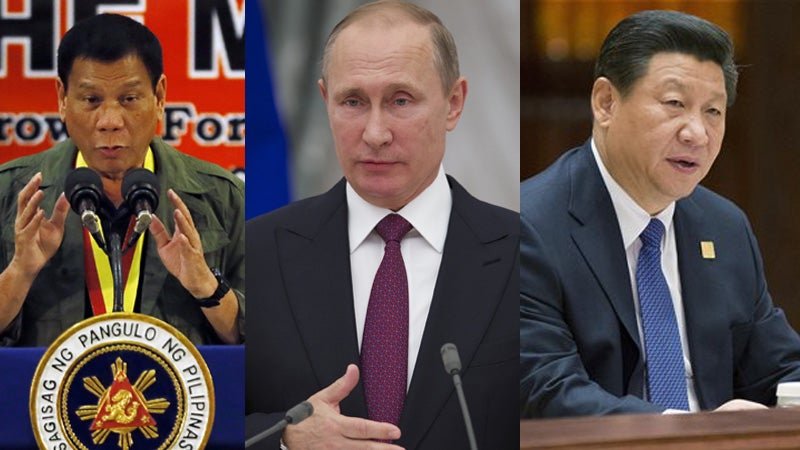 PRESIDENT Duterte said on Tuesday he would build by next year “new alliances” with China and Russia to cushion the fallout from the possible withdrawal of the United States from the Philippines.

In a speech in Pampanga province, Mr. Duterte said Filipinos would have to make a small sacrifice for what he had previously declared “crossing the Rubicon” in his ties with the United States while pursuing partnerships with its rival countries or what he called countries on the “other side of the ideological barrier.”

“I am asking the Filipino in the coming days, if America will make good its threat, I’m going to ask you to sacrifice a little bit. But by next year, I would have entered into so many new alliances with so many countries,” he said.

In a speech on Tuesday evening at the Navy headquarters, Duterte asked the Marines to give him time so “we can get out of this ambit” of the Americans “who have pushed us around, insulted us.”

The President expounded on his Monday speech in which he announced his plan to meet Chinese President Xi Jinping and Russian Prime Minister Dmitry Medvedev after flying to Vietnam and Japan.

“I would have alliances on trade and commerce with China. Russia has agreed to talk about how they can help us here. China is ready to help us with this goddamned problem of drugs,” he said.

On China, Mr. Duterte said he would ask its leaders to focus on its criminals, noting the massive shabu (methamphetamine hydrochloride) laboratory recently uncovered in Pampanga was owned by Chinese and used machines and boilers made in China.

“We want them to control their people, increase focus on criminals. We are friends so why does this happen, you, as a friend, should be helping us out,” he said.

Mr. President vented out anew his running feud with the United States for what he perceived as its undue interference on how he was addressing illegal drugs and crime.

“They said they don’t like me,” Mr. Duterte said, referring to adverse reports that his unstable foreign policy and brutal war on drugs were driving away investors based on the sharp drop in the peso which has hit a seven-year low.

He  called the peso slide a “manipulation” by his critics to make him look bad.

“Go out,” he said. “Remove all your deposits but do not impose on us anything. We are no longer a colony of the United States. We cannot be controlled in how I run (my country).”

Mr. Duterte said he would not bow to the dictates of the United States, especially to President Barack Obama, who urged him to carry out his war on drugs “the right way.”

“Even if the United States will do everything to make us, me kneel down, I will not,” he said.

He resented Washington lecturing him on human rights protection while it allow its policemen to shoot down blacks. “What kind of double standard is that?” he said.

In Monday’s press conference, Mr. Duterte was asked by a reporter what he meant by crossing the Rubicon.

He said it was “a point of no return.”

He said the problem was that the Philippines’ mutual defense treaty with the United States did not guarantee that Washington would come to the Philippines’ defense if it was attacked because the US president would need the approval of Congress.

In Washington, Department of State spokesperson Mark Toner said that despite Mr. Duterte’s repeated criticisms of the United States, the department had not been officially contacted by Philippine authorities regarding any of those things.

He said the United States believed it could remain a close friend and partner of the Philippines.

“We are not deaf. We do hear what he says. But our cooperation with the Philippine government remains strong and unabated,” Toner told reporters.

“He (Duterte) makes public statements. We have not, though, seen anything with regard to our relations with the Philippines that would indicate a shift, if you will, or a turning away,” he added.

Earlier this month, Obama canceled a formal meeting with Duterte at a summit of Asia-Pacific leaders after the Philippine leader used the phrase “son of a bitch” in warning that he wouldn’t accept lectures from Obama on human rights.

Mr. Duterte has also said he would not allow Filipino forces to conduct joint patrols with the US military in the disputed South China Sea and that he wants US forces out of Mindanao, where he said minority Muslims resent the presence of American troops. With a report from AP