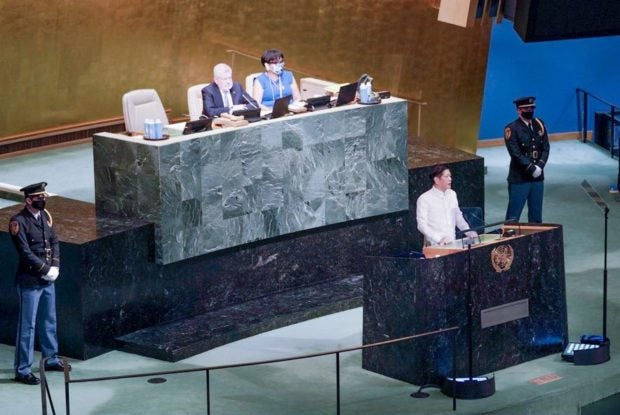 President Ferdinand Marcos Jr. delivers his speech at the United Nations General Assembly in New York during his six-day working visit to the US. (Photo from the Office of the Press Secretary)

NEW YORK CITY — Despite the COVID-19 pandemic and the global crisis caused by soaring energy and food prices, President Marcos on Tuesday (Wednesday in Manila) told the United Nations General Assembly (UNGA) that the Philippines was on track to a higher income status by 2023.

“Despite the challenges of the pandemic and the global economic upheavals, we remain on track to reach upper middle-income status by next year,” he said.

The World Bank (WB) classifies the world’s economies into four income groups—low, lower-middle, upper-middle and high income. The classifications are updated each year on July 1 and are based on the gross national income (GNI) per capita of the previous year. GNI is the total amount of money earned by a country’s people and industries. Dividing GNI among the population results in the GNI per capita.

The Philippines is currently considered a lower-middle income country, together with Association of Southeast Asian Nations (Asean) neighbors Cambodia, Indonesia, Laos, Myanmar and Vietnam. Asean members in the upper-middle income category are Malaysia and Thailand, while Brunei and Singapore are in the high income bracket.

“With steady investment in food security, public health, education and other social services, we expect to become a moderately prosperous country by 2040. I am confident that we will achieve this vision,” Mr. Marcos added.

In his speech, Mr. Marcos joined calls for immediate action by industrialized nations to cut greenhouse gas emissions, describing climate change as the “greatest threat affecting our nations and peoples.”

“There is no other problem so global in nature that it requires a united effort, one led by the United Nations. The effects of climate change are uneven and reflect a historical injustice,” he said.

“The Philippines, for example, is a net carbon sink. We absorb more carbon dioxide than we emit. And yet, we are the fourth most vulnerable country to climate change,” he said.

“We need to take concrete steps towards a modern and resilient agriculture,” he said.

He likewise noted that stability in Asia was “under threat by increasing strategic and ideological tensions,” referring to the US-China tension over Taiwan.

“Reinforcing the predictability and stability of international law, particularly the 1982 United Nations Convention on the Law of the Sea, we provided an example of how states should resolve their differences: through reason and through right,” he said, his only reference to Philippines’ historic win before an UN arbitral ruling in 2016 in the territorial dispute with China over the West Philippine Sea.

He stressed, however, that “the Philippines shall continue to be a friend to all, and an enemy of none,” first framed by the previous Duterte administration.

He spoke at the UN plenary hall, where seats have been assigned per country delegation. The plenary hall was mostly empty, which was not unusual since the leaders have meetings on the sidelines.

After his speech, he met with UN Secretary General Antonio Guterres and discussed “areas of [UN] cooperation and support [and] exchanged views on the international situation as well as climate action initiatives,” according to the readout issued by the UN.

More than 100 protesters against Mr. Marcos and the martial law regime of his father and namesake joined the various antigovernment demonstrations outside the UN headquarters.

A small contingent of about two dozen pro-Marcos supporters also held their own alongside the anti-Marcos protesters.

In Manila, an environmental group stressed on Wednesday that the President should come up with a “clear plan” for climate action and climate justice.

“At present, we hear all this talk about climate justice, climate action, protecting biodiversity, ensuring food security, and upholding justice and human rights, but, in reality, most developments on the ground and the administration’s policy direction are leading us away from these purported aspirations,” Guerrero said in a statement sent to the Inquirer.

—WITH A REPORT FROM DEMPSEY REYES

Marcos at NYSE: Can’t see PH future without US

Read Next
Marcos to meet with Biden on his working visit to US
EDITORS' PICK
House energy committee chair Arroyo bats for cheap electricity
PNP vows to bring justice for slain Percy Lapid; says probe underway
Percy Lapid’s kin: ‘We demand that his cowardly assassins be brought to justice’
‘Seniority’ requirement despite vacant posts in DOH bothers senators
Nothing’s certain so here’s how everyday Filipinos can make the most out of their Plan B
Do all the things you do, faster
MOST READ
Student stabs teacher dead in Samar town
Trixie Angeles quits as press secretary due to health reasons
Not rehired?: Trixie Angeles not on list of reappointed Cabinet execs
Heart Evangelista to stay abroad ‘indefinitely’: ‘Hindi muna ako babalik’
Don't miss out on the latest news and information.