Marcos at NYSE: Can’t see PH future without US 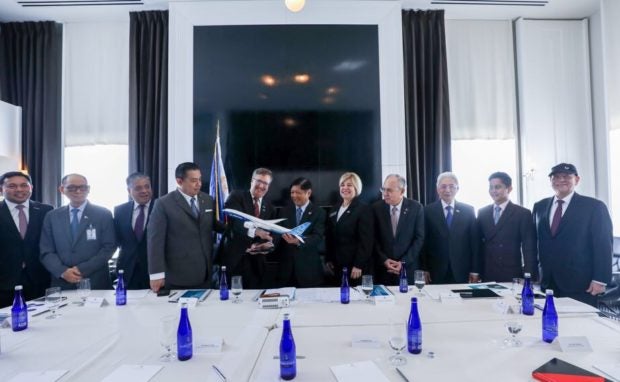 READY FOR TAKEOFF | President Ferdinand Marcos Jr. and his official delegation, including Speaker Martin Romualdez, meet with Boeing officials on Sept. 20 as part of his six-day working visit to New York. —MALACAÑANG PHOTO

NEW YORK CITY — President Ferdinand Marcos Jr. has invited American investors to do more business in the Philippines, giving his strongest commitment yet to the country’s long-standing alliance with the United States and indicating a major foreign policy shift after the pivot to China and Russia of his predecessor, former President Rodrigo Duterte.

On the second day of his six-day US visit, Marcos addressed global investors and traders from the world’s financial center, the New York Stock Exchange (NYSE), as the special guest to ring the bell to close the day’s trading at 4 p.m. on Monday (4 a.m. on Tuesday in Manila).

“We have adjusted many of our ways of doing business at the behest of our friends in the United States and of the American businesses that are already in the Philippines,” he said in a forum hosted by NYSE vice chair John Tuttle and attended by his economic team and business executives, including several Filipino tycoons.

“I think that that will give us great opportunities in the future and for both our countries, for private corporations, for government-to-government agreements and arrangements,” he added.

He related his geopolitics discussion earlier during the business lunch hosted by the US-Philippine Society at The Brook Club, one of the oldest elite private clubs in New York.

“It is very clear to me in my vision for the way that the country will move forward, that I cannot see the Philippines in the future without having the United States as a partner,” Marcos said.

He said his administration was seeking partnerships in public infrastructure such as mass transit systems, airports, toll roads; in public services; in digitization initiatives; in energy development; and agriculture modernization.

He offered investment opportunities for American businesses in areas such as information technology and business process management or IT-BPM; medical products and devices; electric vehicles and batteries; agribusiness, and telecommunications infrastructure and services.

“We are all thrilled to be here. We’re familiar with the New York Stock Exchange and the bell and that most important balcony in the world. We had always watched it from afar,” said Marcos, who later signed the guest book reserved for dignitaries and rang the closing bell from the balcony of the trading floor.

The Philippine flag was hoisted at the façade of the historic NYSE building and shown on the screen of the trading floor.

Aboitiz, whom Marcos designated as head of the Private Sector Advisory Council, was one of the 30 representatives of the Philippine business community selected to accompany the Department of Trade and Industry (DTI)-led government delegation to the United States.

Earlier in the day, he met with executives of American companies NuScale Power, which designs and markets small modular reactors; Wastefuel, which is into waste-to-fuels technology, and Boeing, one of the world’s biggest aerospace manufacturers and defense contractors, urging them to invest in the Philippines.

The president’s convoy arrived at the NYSE just as a group of Filipino-American protesters shouting anti-Marcos martial law chants converged in the street in front of the NYSE which was only closed to motorists but remained open to pedestrians.

With US Secret Service agents around, the protesters were just a few meters away as they heckled Mr. Marcos when he alighted from his vehicle.

The same group also held a protest outside the venue of Marcos’ meeting with members of the Filipino community at the New Jersey Performing Arts Hall on the first day of his visit.

The protesters, who were denouncing Marcos’ father, the late strongman Ferdinand Marcos, and former President Duterte, dispersed more than an hour before the presidential convoy arrived.

In Manila, two of the biggest export groups said on Tuesday that they welcomed the president’s trip to the United States as it bodes well for businessmen in both countries.

“It is good. This is like public relations. This is to remind the US that we are still here,” Foreign Buyers Association of the Philippines (Fobap) president Robert Young told the Inquirer over a phone interview.

“It shows that we are ready to work with them,” Ortiz-Luis said in a separate phone interview with the Inquirer.

Young said he was hoping that the US Generalized System of Preferences (GSP) could be tackled at the sidelines of one of the meetings because of its importance to local exporters.

“It expired almost two years ago. They have not extended it for some reason,” said Young. The trade program, which gives preferential tariff rates on US imports from eligible countries, was last granted to the Philippines in March of 2018 under former US President Donald Trump. It expired on Dec. 31, 2020.

“They (US buyers) will not be buying more because they pay (import) duties now with the GSP suspended. They told me they would be deducting the quantity that they are buying,” Young said, recalling a conversation with one of their US clients.

According to the DTI, Philippine exports to the western country under the GSP totaled $1.73 billion in 2019.

—WITH A REPORT FROM ALDEN M. MONZON

Read Next
PH to be ‘moderately prosperous’ by 2040 – Marcos
EDITORS' PICK
House energy committee chair Arroyo bats for cheap electricity
PNP vows to bring justice for slain Percy Lapid; says probe underway
Percy Lapid’s kin: ‘We demand that his cowardly assassins be brought to justice’
‘Seniority’ requirement despite vacant posts in DOH bothers senators
Nothing’s certain so here’s how everyday Filipinos can make the most out of their Plan B
Do all the things you do, faster
MOST READ
Student stabs teacher dead in Samar town
Trixie Angeles quits as press secretary due to health reasons
Not rehired?: Trixie Angeles not on list of reappointed Cabinet execs
Heart Evangelista to stay abroad ‘indefinitely’: ‘Hindi muna ako babalik’
Don't miss out on the latest news and information.