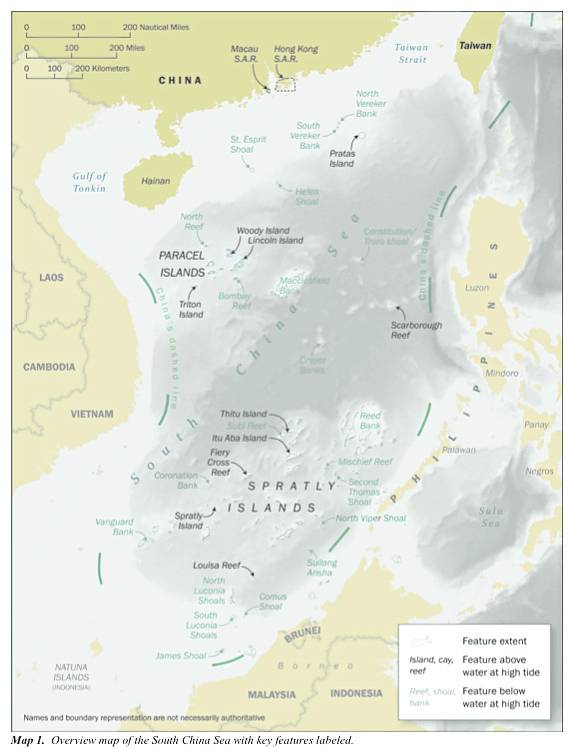 FILE PHOTO: A screenshot taken from the US Department of State’s website shows a map of the South China Sea that was among the materials used to analyze China’s claim over an area encompassed by the so-called nine-dash line. In a 47-page study, the department said Beijing’s maritime claims in the South China Sea are “inconsistent with international laws reflected in the 1982 United Nations Convention on the Law of the Sea.”

WASHINGTON — The United States on Thursday backed the Philippines in criticizing a unilateral seasonal ban on fishing declared by Beijing in the dispute-rife South China Sea.

The State Department pointed to a 2016 ruling by a court in The Hague that rejected China’s claims, as well as the UN Convention on the Law of the Sea, ratified by China although not by the United States.

“The PRC’s unilateral fishing moratorium in the South China Sea is inconsistent with the 2016 Arbitral Tribunal ruling and international law,” State Department spokesman Ned Price wrote on Twitter, using an acronym for the People’s Republic of China.

“We call upon the PRC to abide by its obligations under international law.”

The Philippines, a treaty-bound ally of the United States, on Tuesday summoned a Chinese diplomat over the announcement of a unilateral fishing ban as well as alleged harassment of a marine research vessel by a Chinese coast guard ship.

China has each year declared a fishing ban in the summer, pointing to the need to develop sustainable marine life due to overfishing in the major population hub.

But its actions have been caught up in disputes over sovereignty, with Beijing insisting it has jurisdiction over a vast part of the South China Sea – a longstanding source of friction with the Philippines, Vietnam, and other Southeast Asian nations.

US to announce plans to battle illegal fishing in the Pacific