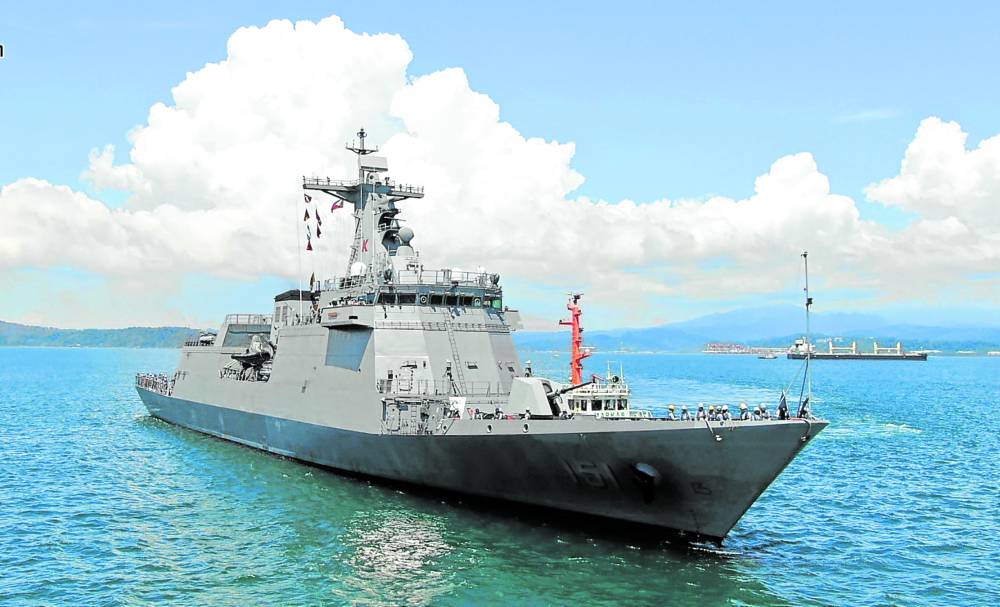 REPRESENT The Philippine Navy is sending its newest frigate, BRP Antonio Luna—photographed here on May 25 in Subic Bay—to the US-led Rim of the Pacific Exercise to be conducted June 29 to Aug. 4 around the Hawaiian Islands and California. —PHILIPPINE NAVY PHOTO

The Philippines will send one of its two guided-missile frigates to the world’s largest naval exercise involving about 25,000 personnel from 26 countries at the end of the month.

BRP Antonio Luna (FF-151) will sail from the country next week to join the US-led Rim of the Pacific (Rimpac) Exercise, the Philippine Navy said on Thursday.

Thirty-eight ships, four submarines, nine national land forces and more than 170 aircraft will participate in the biennial Rimpac from June 29 to Aug. 4, in and around the Hawaiian Islands and southern California, the US Navy announced on Wednesday.

The US Navy said that the participants will “train and operate together in order to strengthen their collective forces and promote a free and open Indo-Pacific.”

The training will include amphibious operations, gunnery, missile, anti-submarine and air defense exercises, as well as counterpiracy and mine clearance operations, explosive ordnance disposal, and diving and salvage operations.

The Philippines will be joined by four other Southeast Asian countries – Malaysia, Brunei, Indonesia and Singapore – all situated around the South China Sea, a flashpoint in the rivalry between the US and China, which has been aggressively asserting its maritime dominance.

“Clearly they might be using Rimpac as a signaling towards China not to take them too lightly or in a too cavalier manner over the recurring instances of maritime coercion,” Koh told the Inquirer.

China claims nearly the entire South China Sea, which includes the West Philippine Sea and straddles one of the world’s busiest sea lanes atop possibly large oil and gas fields.

The overlapping maritime and territorial claims over these waters are creating tension between small Asian nations and the military and economic power house.

In 2016, an international arbitral tribunal ruled in favor of the Philippines to invalidate China’s claims demarcated by its so-called nine-dash line. Beijing refuses to recognize the ruling.

Other countries joining the Rimpac include India, Japan and Australia, which are partners in the US-led Quadrilateral Security Dialogue (Quad), as well as the United Kingdom, which is part of the Aukus, a trilateral security pact among Australia, UK and US.

The Aukus and Australia’s abandonment of a multi-billion submarine deal with France in favor of US technology, had angered the French government and triggered a diplomatic row between the two countries.

France, however, is joining Rimpac this year, an indication that Paris “is keen to set aside differences over the Aukus saga, and this is seen in the context of the newly-elected Albanese government in Australia,” according to Koh.

He said that the participation of other countries in the region that were initially critical of Aukus, such as Indonesia and Malaysia, “does implicitly indicate general comfort” with the security pact.

After it was scaled down in 2020 due to the pandemic, this year’s exercise is significant in that it would show “renewed appetite amongst regional countries to get back into this defense/naval diplomacy business, and keep such ties warm,” Koh said.

“For the US, it is a demonstration of the international naval clout it maintains, given Rimpac remains the world’s largest multinational naval exercise,” he said.

Koh said the exercise is a response “to skeptics who argue that the US is in the decline or increasingly eclipsed by the People’s Liberation Army (PLA) Navy.”

With the PLA Navy surpassing the number of ships of the US Navy, “Rimpac is key to highlight that fleet size isn’t the only tangible indicator of naval capability – and that alliances and partnerships are equally if not more important,” he said.

“For the regional and international participants, this year’s Rimpac would have different meanings, though generally at least, every country participating in this exercise would seek to use this event to profile itself on the world stage,” Koh said.