The National Parks Development Committee (NPDC), an attached agency of the Department of Tourism, recently launched a new logo for Rizal Park, Luneta, as well as the Rizal Park Free Library and the Rizal Park Guide App to commemorate the 125th anniversary of the martyrdom of Dr. Jose Rizal for Rizal Month while holding a special flag ceremony attended by President Rodrigo Duterte on December 30, 2021.

The reveal of the new Rizal Park, Luneta logo was held during the “Stop and Salute Flag Ceremony” in partnership with the Salute to a Clean Flag Movement (STACF) and the National Historical Commission of the Philippines, held at the site of the Rizal Monument and Independence Flagpole last December 27 at the Rizal Park, Luneta. Soldiers of the Armed Forces of the Philippines raised the Philippine flag with Soprano Bernadette Mamauag singing the National Anthem as it was being translated by Filipino Sign Language interpreter Ms. Christine Faye Garica. This was followed by a powerful rendition of the led the “Panunumpa ng Katapatan sa Watawat” delivered by Award-winning actor John Arcilla. 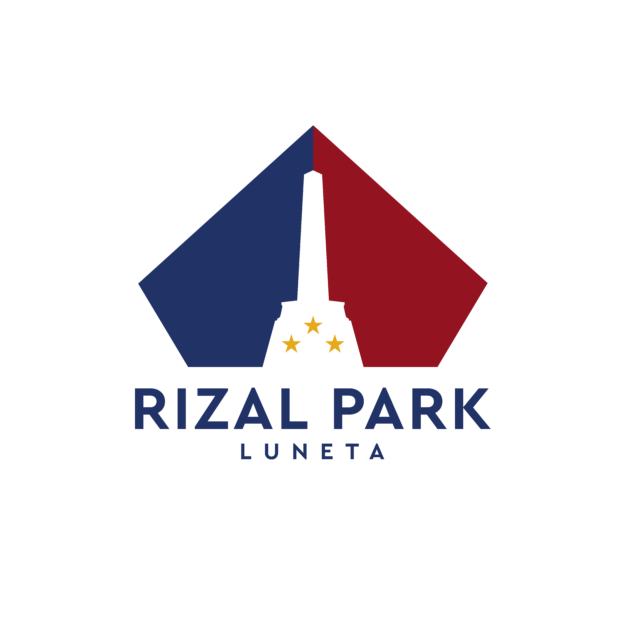 The new Rizal Park logo was unveiled by Mr. Jezreel Gaius A. Apelar, Deputy Executive Director of the NPDC. The new logo was carefully designed with the able guidance of members of the scholarly community such as Dr. Ambeth Ocampo and Dr. Xiao Chua, and other custodians of Philippine culture. Three important elements make up the logo: the lunette- the crescent shaped defense structure used in fortifying the outer walls of Intramuros; ; the Rizal Monument, whose shape has become one of the most recognizable structures in the park, and which is  often used to symbolize Manila or the Philippines; and three stars which, like those in the Philippine Flag, signifying the island groups of Luzon, Visayas and Mindanao. The colors of the logo, meanwhile, represent the ideals espoused by Dr. Jose Rizal: blue, the colors of sky and sea- for honor and patriotism; red, the color of red earth- for courage and love of country; and golden light- the rays from the sun and the stars- that represent education and the light it brings. It is NPDC’s aim that through this new logo, Rizal Park, Luneta will be able to create a new sense of identity for our nation’s premiere national park, and to be able to foster a community around it.

After the logo launch, NPDC signed a Memorandum of Agreement to partner with the Library Renewal Partnership to install mini library stands around Rizal Park. The signing of NPDC and Library Renewal Partnership MOA and ribbon cutting of the Rizal Park Free Library was done by its founder and Managing Director Mr. Quintin Pastrana with NPDC and National Library of the Philippines.

To cap off the Rizal Month celebrations, NPDC also launched the Rizal Park Guide App, made possible in partnership with Orange and Crane Innovations, Inc. This app provides park goers with an interactive experience around Rizal Park, Luneta with QR codes providing historical information about all the park’s landmarks and attractions. The app also provides regular updates on upcoming events and announcements. Those who are not able to visit the park may also watch the virtual tours and videos provided in the app. The Rizal Park Guide App is free to download on the Apple Store and Google Play Store.

With the aim of increasing awareness and educating the new generation on the importance of our heritage, our national hero and our national parks, NPDC is proud of these projects launched during Rizal Month. Despite the challenges of the pandemic, NPDC and its partners have been able to deliver quality events and offerings for the general public to commemorate Dr. Jose Rizal’s 125th Martyrdom. The new logo, new branding, new free mini library coupled with new technology brings Rizal Park, Luneta at the forefront of innovation, while instilling a sense of national pride to more Filipinos across generations.

This law firm chose to focus on service, not on glamor