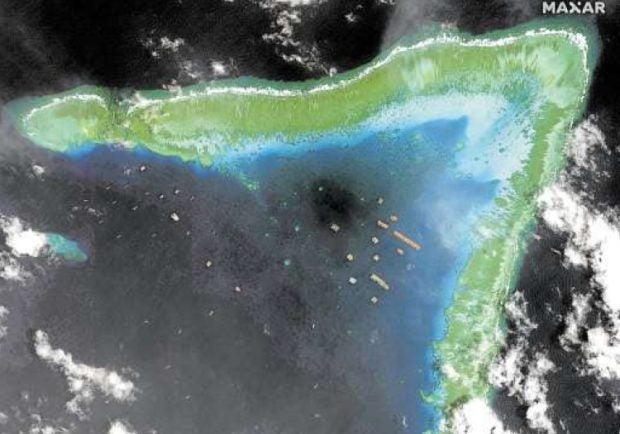 HARMFUL PRESENCE Chinese maritime militia vessels are shown in this March 23, 2021, satellite photo at the boomerang-shaped Julian Felipe (Whitsun) Reef within the country’s 370-kilometer exclusive economic zone. The National Task Force for the West Philippine Sea says the presence of Chinese naval, coast guard and militia vessels was harmful to the peace and security of the region. —AFP

MANILA, Philippines — Several senators have called on the government to probe reports that Chinese vessels anchored in parts of the West Philippine Sea are dumping human waste and sewage in the area, with one seeking the filing of a diplomatic protest on the matter.

“DENR (Department of Environment and Natural Resources) should investigate this, and if there is basis, file charges in court. Government cannot fine sidewalk litterers while turning a blind eye to this,” Senate President Pro Tempore Ralph Recto said in a statement Tuesday.

Recto pointed out that ships are prohibited under domestic and international laws from “dumping its refuse and trash into our oceans.”

“Under Philippine laws, such are environmental crimes that carry a jail term and a hefty fine,” he added.

“But even without these laws, decent human behavior commands civilized men not to turn rich fishing grounds into a cesspool of feces,” the senator further said.

The Department of Foreign Affairs, Recto added, should also study the filing of a diplomatic protest on the matter.

“It is not only reclaiming land in the West Philippine Sea; by its actions, it is also renaming it as the Waste Philippine Sea,” Recto said.

“By turning reefs into toilets, two man-made things are now visible from space: the Great Wall of China on land, and the Great Wastes of China at sea,” he added.

Senator Francis Tolentino likewise suggested that the DENR immediately conduct its investigation “to determine the accuracy of the reports.”

“Thereafter, if it is determined that state actors or state-sponsored activities were involved, the Department of Foreign Affairs should take the appropriate action by invoking the Convention on Biological Diversity, as the anthropogenic pressures on the area will impact on the coral reefs and other vulnerable ecosystems which the international community aims to protect,” he added.

Senator Risa Hontiveros also stressed the need for the government to confirm the reported dumping of waste in parts of the West Philippine Sea.

(Our own government should confirm this so that we can have data on what China continues to destroy in our seas. In addition to this, we should continue our calls for China to remove its vessels in the area.)

She said that the DENR has yet to release a baseline report regarding the country’s loss due to the destruction of natural resources in the West Philippines Sea.

(It’s better for the DENR to have an official report that would compute how much China owes us. This can serve as our basis in asking China for reparation for their incursions.)

For his part, Senator Francis Pangilinan demanded that China stop its reported waste-dumping activities in the area and leave.

(It’s not yours to begin with yet you’re destroying it. Leave.)

(China is now treating us as a trashcan. This is how China rewards cowardice and subservience.)

Pangilinan said the government must assert its rights over the said waters and protect Filipino fishermen’s freedom to earn a living there.

She said this should serve as a “wake up” call to the administration of the “stinking reality” that China “gives no respect to international law, whether it be our territorial or environmental rights.”

“When the ships don’t move, the poop piles up,” Liz Derr, co-founder and CEO of Simularity, said during Monday’s forum hosted by Stratbase ADR Institute on the fifth anniversary of the Philippines’ 2016 victory against China.