MANILA, Philippines—As hundreds of Chinese ships continue to violate Philippine maritime boundaries, they also bring incalculable ecological damage to these areas through what could be the biggest insult to Filipinos—their poop.

“The hundreds of ships that are anchored there are dumping raw sewage, every day onto the reefs they are occupying,” said Liz Derr, co-founder and CEO of US geospatial firm Simularity, at a forum hosted by Stratbase ADR Institute on the fifth anniversary of the UN-backed court arbitral ruling in the West Philippine Sea. 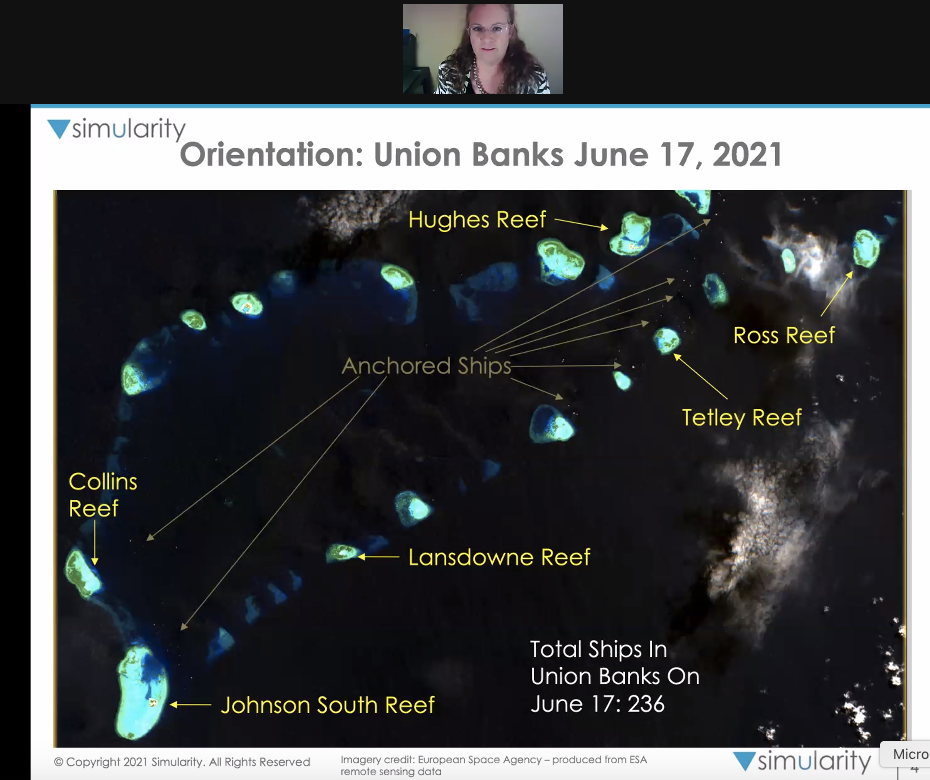 “When the ships don’t move, the poop piles up,” Derr said.

This emerging problem cannot be easily flushed away, it seems. Human activity in the Spratly Islands, according to Derr, is significantly damaging the coral reefs, which could kill fish stocks in the entire South China Sea and on which depend millions of people in the region.

Based on satellite images gathered by Simularity, damage to reefs in some parts of the Spratly Islands in the West Philippine Sea in the last five years caused by sewage effluent is “visible and dramatic,” on top of marine destruction caused by China’s artificial-island building and illegal harvest of giant clams.

“This is a catastrophe of epic proportions, and we are close to the point of no return. This needs to stop immediately,” she added.

For her presentation, Derr focused on Union (Pagkakaisa) Banks, which is within the Philippines’ exclusive economic zone (EEZ) but is also occupied by China and Vietnam.

“The anchored ships are creating chlorophyll-a blooms in the Union Banks, and we can see that from satellite imagery,” she said of the images taken in June 2021. 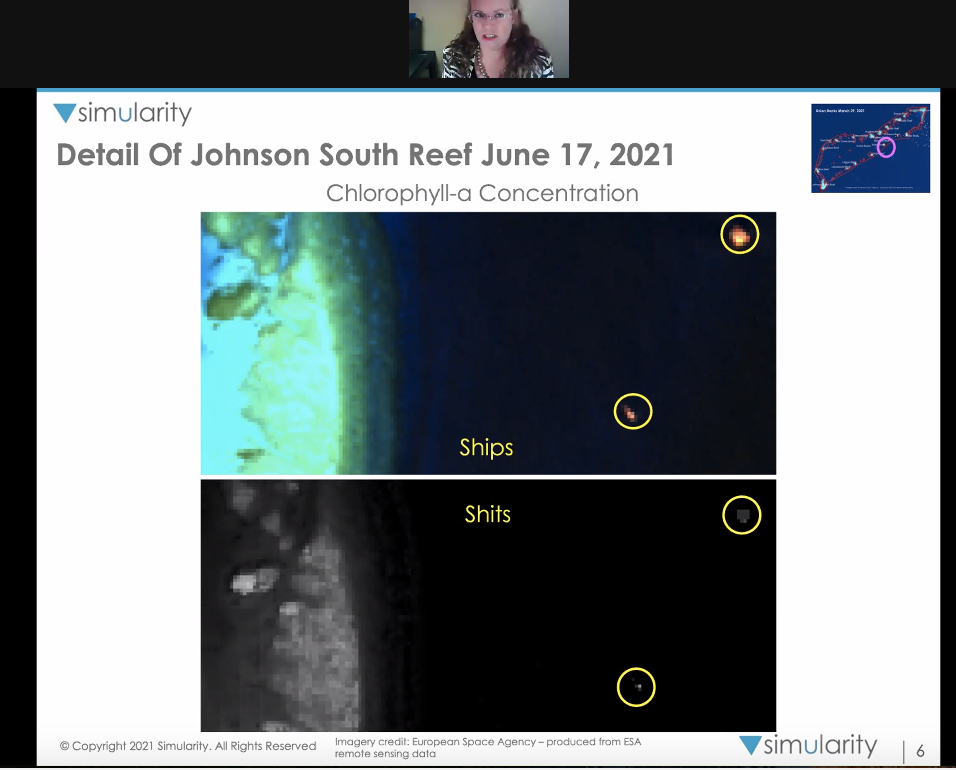 Some areas were seen with “increased nutrients from sewage effluent” or “increased chlorophyll-a.”

Chlorophyll-a, she explained, is a measure of phytoplankton, which in excess can actually involve a process that ends up creating a hypoxic ‘’dead zone” at the bottom of the sea floor.

On reefs, Derr said the excess chlorophyll-a indicates the amount of plant material, such as fleshy algae that is on the reef.

“The excess nutrients in the sewage are causing elevated concentrations of chlorophyll-a, leading to a cascade of reef damage that can take decades to recover even with active mitigation,” she warned.

On Johnson South and Tetley Reefs, satellite images showed a few ships with “shits that correspond to them that show up in the chlorophyll-a view” in June 2021. 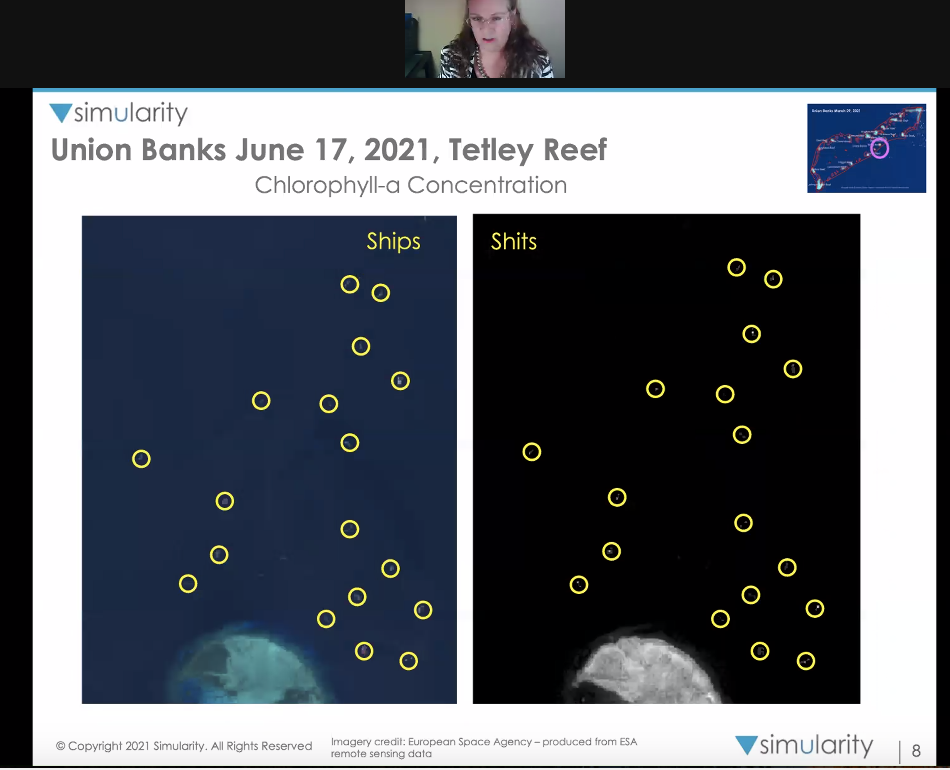 Satellite images taken on Ross, Lansdowne and Hughes Reefs compared from May 2016 and June 2021 showed overgrowth of algae in the last five years.

“Those dark areas which are areas without chlorophyll have disappeared, and more high white areas have increased and the overall loss of differentiation of the reef features is caused by plants, overtaking those distinct features,” Derr said.

“Part of that damage is the sewage that these anchored ships, more than 200 of them, are dumping into that reef water. And it gets worse, it’s not just plants, overtaking a few reefs here,” she said.

“It’s not just a few leaks of sewage. The problem is, even small increases in nutrients can tip the balance towards algae,” she said.

Other factors, like overfishing, fishers’ use of rocks as anchors, and dynamite fishing further exacerbate the devastation in the area.

“The health of the Spratly reefs basically feeds the inhabitants of the entire coastal region of the South China Sea,” Derr said.

Many of the inhabitants of the reefs are food for the fish that make up the supply for nations around the South China Sea, including the Philippines.

“The size of the fish stock in the South China Sea is directly linked to the health of its reefs,” Derr said.

She also presented a report showing “nurseries” that generate larvae that become the adult fish stock that make up fishery stock in Vietnam, the Philippines, Malaysia, Brunei and Indonesia.

“This emphasizes the fact that this is not a problem for one nation and defending one economic zone. This is something that we have to work together to address,” Derr said.