This latest repatriation resulted in the embassy shelter being “fully emptied out” for the “first time in history.”

The 22 Filipinos, the final batch of repatriated wards who stayed at the Filipino Workers Resource Center (FWRC) embassy shelter, left Syria on June 24.

They arrived in the Philippines on June 26, the Department of Foreign Affairs (DFA) said in a separate statement Sunday.

Many of those repatriated have been staying in the shelter for nearly three years due to difficulties in securing exit visas from their employers and recruitment agencies, according to the embassy, which was taken over by a new leadership early this year.

“At last, we’re going home. We thought we had no more of ope being able to go home,” one of the wards was quoted as saying in Filipino in the embassy statement. 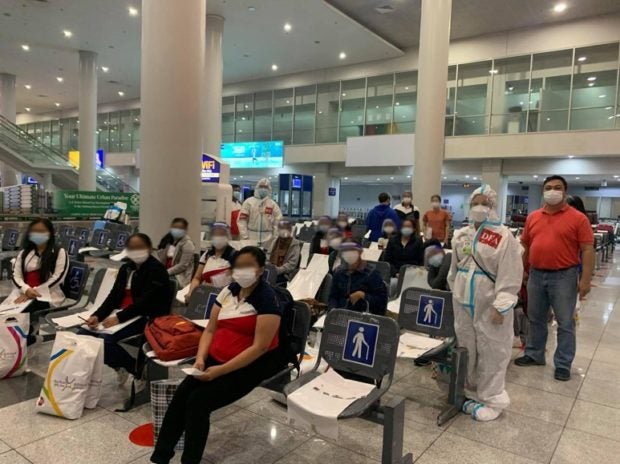 The shelter wards arrive at the Ninoy Aquino International Airport Terminal 3 on June 26, 2021. (Photo courtesy of the Department of Foreign Affairs)

Many of the trafficking survivors were granted a presidential pardon after being accused of stealing from or escaping their employers.

“Most of the cases of the Filipinas are false charges of theft and absconding from their employers,” the embassy’s new chargé d’ affaires, human rights lawyer Vida Soraya Verzosa, told INQUIRER.net in a message.

According to the embassy, Verzosa had requested in her previous meetings with Syrian officials that a presidential pardon be granted to the Filipino wards so they would no longer be liable for their cases.

“Thus, the processing of their exit visas was expedited after these negotiations,” the embassy noted.

The embassy also said that it has assisted the Filipino trafficking survivors “in holding the illegal recruiters in the Philippines, Malaysia, Dubai, and Syria accountable” with the help of the Philippine Overseas and Employment Administration (POEA), Inter-Agency Council Against Trafficking (IACAT) and the Blas Ople Policy Center.

These agencies, according to the embassy, assisted in the filing and prosecution of illegal recruitment and trafficking in persons cases.

The said Filipinos, the embassy further noted, were given free legal assistance by volunteer lawyers and law students from the Ateneo de Naga University College of Law and the Ateneo Human Rights Center, who “assisted them in preparing their complaint-affidavits and evidence packets against the criminal syndicates.”

Aside from being trafficked to Syria, the Filipino wards were also victims of illegal recruitment and experienced abuse from their employers.

The five-member augmentation team of diplomatic staff, led by Verzosa, filed cases against “anomalous transactions” of recruitment agencies and abusive employers in Syrian courts on behalf of the Filipino victims, the embassy said.

“This historic repatriation is part of the commitment of the Department of Foreign Affairs of the Philippines, as an IACAT (Inter-Agency Council Against Trafficking) member agency, to arrest, investigate, and prosecute all human traffickers and illegal recruiters, combat the heinous crime of trafficking in persons, and assist the trafficking survivors in granting opportunities for a new life and a new hope, upon their arrival in the Philippines,” the embassy said.

The DFA, in its statement, said the Filipino repatriates were briefed on the health quarantine protocols and will likewise receive reintegration assistance.

The Philippine Embassy in Syria advised those in need of any assistance to contact its team through the following: