‘Chained, kept in the toilet for 7 years’: Envoy shares plight of trafficked, abused OFWs in Syria 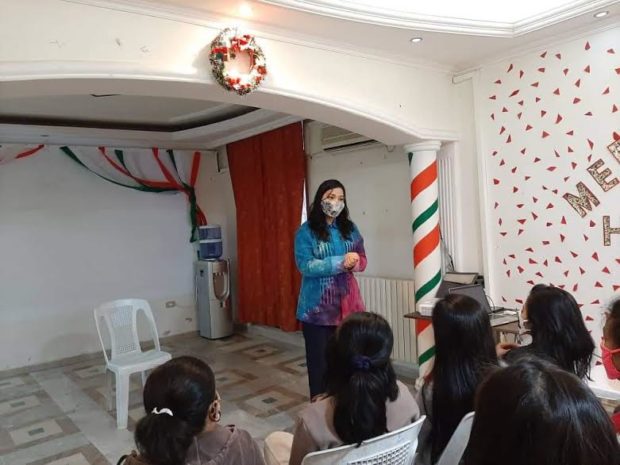 MANILA, Philippines — Kept for seven years in the toilet and “treated like an animal.”

This was how Philippine Embassy in Syria Chargé d’ affaires Vida Soraya Verzosa described the abuse of an overseas Filipino worker (OFW) who stayed in the embassy shelter and was later brought home to the Philippines.

“Let me tell you the story of Lara. That’s not her real name, but it’s just an alias for her. Lara really makes me very emotional,” Verzosa shared in an interview on INQside Look when asked about the plight of trafficked and abused OFWs in Syria.

“She was really treated like an animal. She was chained by her employer. She was kept for seven years in the toilet or the hammam. They would punch her so hard that her teeth would be knocked out. The employer would throw the urine of the baby that she’s taking care of,” she added.

Aside from physical abuse, Lara’s employers would also verbally maltreat her and prohibit her from contacting her family, according to Verzosa.

“She was not paid her salaries during that period in time,” the envoy also said.

Lara was able to escape her abusive employers when a Syrian family “took pity on her” and brought her to the Philippine embassy shelter.

“In the shelter, we gave her medical treatment—this was prior to my arrival [in December 2020]—And they also said that they elevated her (Lara) case to the criminal courts here in Syria,” Verzosa said.

While other OFWs in the shelter did not have the “kind of horrific situation” faced by Lara, many of them still suffered “a lot of maltreatment” from their employers, according to Verzosa.

“Their employers would slap them, shout at them. They were not being fed properly. A lot of them would work more than 18 hours a day. They’re really overworked. They’re really underpaid and ultimately it’s a contract violation,” she added.

She said these OFWs are made to sign contracts that are in Arabic, a language that these workers do not understand.

“Really, these are the same things that are also prohibited human trafficking law of Syria,” Verzosa said.

“I mean no disrespect to the citizens of the Syrian Arab Republic but just the reality that the workers go through if they come here illegally to a country where perhaps the culture is very different from us,” she added.

But how did these OFWs get to Syria? Verzosa said they were recruited in the Philippines through fraud and deception.

“It’s really very unfortunate that the Filipino workers who are here in our shelter really suffered a classic case of human trafficking” she said.

According to her, these workers were promised jobs in Dubai and a salary of $400 and above.

She said recruiters promised these workers waitressing or cashier jobs but it turned out that they would end up as household workers in Syria.

“They were promised good working conditions and they were, of course, very much surprised that they were going through backdoor entries,” Verzosa said.

“Like they would be put on a boat to Sabah. And then later on from Sabah to Colombo, Sri Lanka and then from Sri Lanka to Dubai or Abu Dhabi and then from Dubai to Syria,” she added.

“The problem really starts with the recruitment side. A lot of them are promised jobs based on tourist visas,” she said.

According to her, certain recruiters or traffickers are based in far-flung provinces in the Philippines.

These recruiters or traffickers, she said, would tell those who are looking for work abroad that they would be able to leave the Philippines immediately.

“But they would do this through illegal ways such as manufacturing fake birth certificates, to change their age, make them appear that they’re older. To make them go through an assumed identity, so false names in their passports,” Verzosa said.

“When their passports are issued, they would also have fake travel documents. Fake contracts, fake proof that they can travel abroad. By the time that they reach the recruitment agencies in Syria, they would really be very shocked that they went through all that kind of fraud and deception to come here,” she added.

“When they seek help from the embassy, there are a lot of them who really go through horrific accounts of abuse and maltreatment,” Verzosa further said.

Aside from abuse, the envoy said some Filipinos who are in the shelter ended up “running away from their employers” not because of maltreatment but because they did not expect that their work would be household service workers.

“So it’s still on the basis of the fraud that they experienced,” she added.

However, Verzosa stressed that not all OFWs who are in Syria are abused by their employers.

“There are also Syrian employers who are very reasonable who get to issue exit visas when the contract has already expired,” she said.

“There are also a lot of employers who treat the Filipina worker like their own daughters. So they’re the ones to go to the embassy to renew the passports, pay for the proper iqamas (residence permit) and renewal of their working visas,” she added.

“The ones who are here in the shelter, I would say are the extreme examples,” she said.

“Of course, this does not justify any human rights violation on both the Philippine side—in terms of the illegal recruiters and traffickers—and here in the receiving country in terms of the way that the girls here suffer maltreatment in the hands of their employers,” she added.