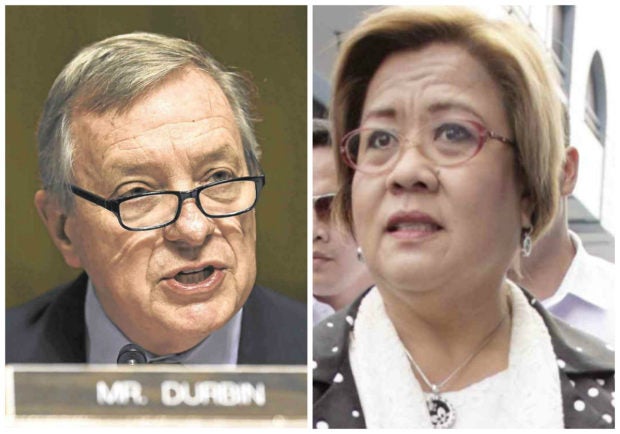 MANILA, Philippines — An American senator holding a top position in the United States Senate assured continued support for Senator Leila de Lima almost four years into what he branded as her “unjust and politically-motivated” detention.

In a tweet over the weekend, Democratic Senator Richard Durbin from Illinois told De Lima that he “will never stop supporting your fight for human rights in the Philippines.”

The U.S. lawmaker is the third-highest ranking member of the majority party as Senate Majority whip.

Durbin, along with fellow senators Patrick Leahy and Edward Markey, were earlier ordered banned from entering the Philippines following their appeals for the immediate release of De Lima, one of President Rodrigo Duterte’s staunchest critics.

Durbin’s tweet vowing support for De Lima was in response to the latter’s Twitter post last Jan. 26, congratulating him and Leahy for securing key posts in the U.S. Senate.

“May you continue to champion human rights as you embark in the next chapter of your country’s journey,” De Lima tweeted.

“Thank you, [Sen. De Lima]…And as the four year anniversary of your unjust & politically-motivated arrest approaches, I want to assure you that I will never stop supporting your fight for human rights in the Philippines,” read Durbin’s reply, which comes less than a month before De Lima marks her fourth year in detention.

And as the four year anniversary of your unjust & politically-motivated arrest approaches, I want to assure you that I will never stop supporting your fight for human rights in the Philippines. https://t.co/dUIftLd4oh

De Lima has been detained since February 23, 2017 over what she has repeatedly called as “trumped-up” drug charges against her.

Durbin and Leahy also introduced an amendment to the 2020 State and Foreign Operations Appropriations Bill which sought to ban US entry to Philippine officials proven to be behind De Lima’s “wrongful imprisonment.”

In response to the ban, Malacañang earlier expressed confidence that the US government would not be able to establish “credible information” in the alleged “wrongful” detention of De Lima as he insisted that the senator’s imprisonment went through the proper judicial process.

Teachers to get three month’s worth of internet load — DepEd