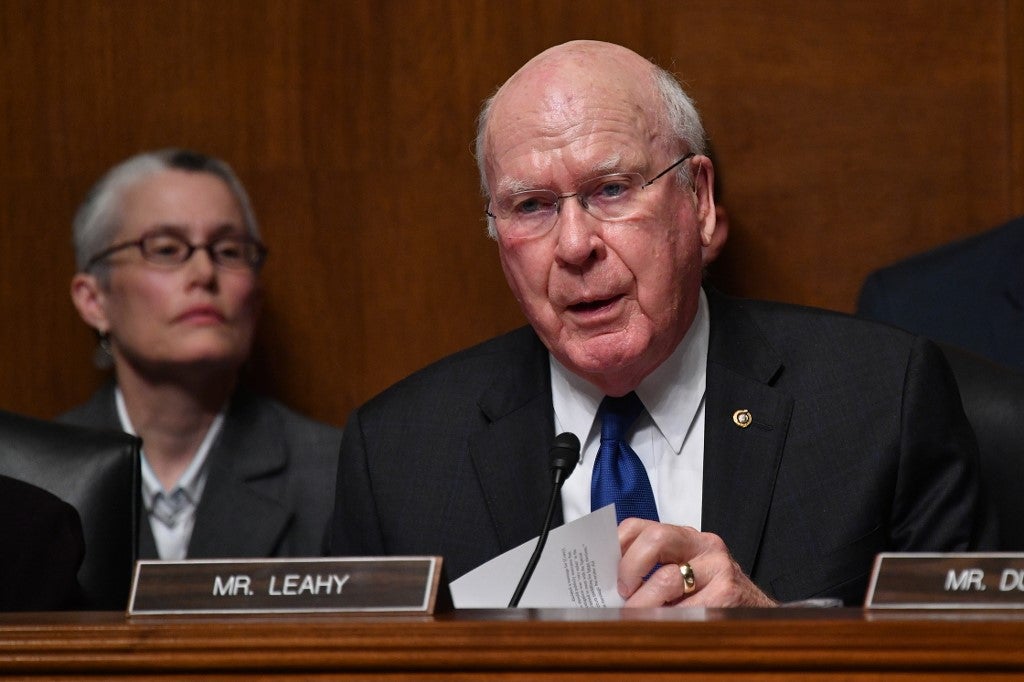 MANILA, Philippines — Barely two days after President Rodrigo Duterte barred him and another senator from entering the Philippines, US Senator Patrick Leahy responded by calling on the administration anew to release detained Senator Leila de Lima rather than “irrationally threatening to deny visas to American citizens.”

In a statement issued Sunday morning (Philippine time), Leahy also insisted that De Lima be given a fair and public trial if she would not be freed right away.

“Rather than responding by irrationally threatening to deny visas to American citizens, the Duterte government should either release Senator De Lima immediately or provide her the fair, public trial she is entitled to,” he said in a statement.

De Lima, one of President Rodrigo Duterte’s fiercest critics, has been in detention at the custodial center of the Philippine National Police in Camp Crame, Quezon City since February 2017 over drug-related charges.

Leahy, along with US Senator Richard Durbin, earlier introduced an amendment to the 2020 State and Foreign Operations Appropriations Bill which sought to deny entry to the US territory all Philippine officials who are proven to be behind the “wrongful imprisonment” of De Lima.

Under the said provision, the “Secretary of State shall apply subsection (c) to foreign government officials about whom the Secretary has credible information have been involved in the wrongful imprisonment of… Senator Leila De Lima, who was arrested in the Philippines in 2017.”

The subsection (c) referred to is the Global Magnitsky Human Rights Accountability Act of the United States, which allows the US to sanction foreign government officials it sees as human rights abusers.

Dutere, on the other hand, ordered the Bureau of Immigration to deny the entry of Leahy and Durbin into the Philippines, according to his spokesman and chief legal counsel.

“The President is immediately ordering the Bureau of Immigration to deny US Senators Dick Durbin and Patrick Leahy, the imperious, uninformed and gullible American legislators who introduced the subject provision in the US 2020 Budget, entry to the Philippines,” presidential spokesperson Salvador Panelo earlier said in a Palace briefing.

The Palace official added that should the US would enforce the said ban, the Philippines would require Americans to secure visas before entering the country.

Leahy, likewise, called on the Duterte administration to recognize Rappler CEO and journalist Maria Ressa “as a courageous Filipino exercising her right of free expression” rather than trying “to silence a journalist who has bravely dared to expose official corruption and abuse.”

In a tweet, the American lawmaker also said that he has “always stood up for the right of journalists to report the news in the United States and around the world.”

I have always stood up for the right of journalists to report the news in the United States and around the world and no one can force me to stop standing up for their rights. My new statement today: https://t.co/sfLQs2FuC6 #Philippines

“No one can force me to stop standing up for their rights,” Leahy added.