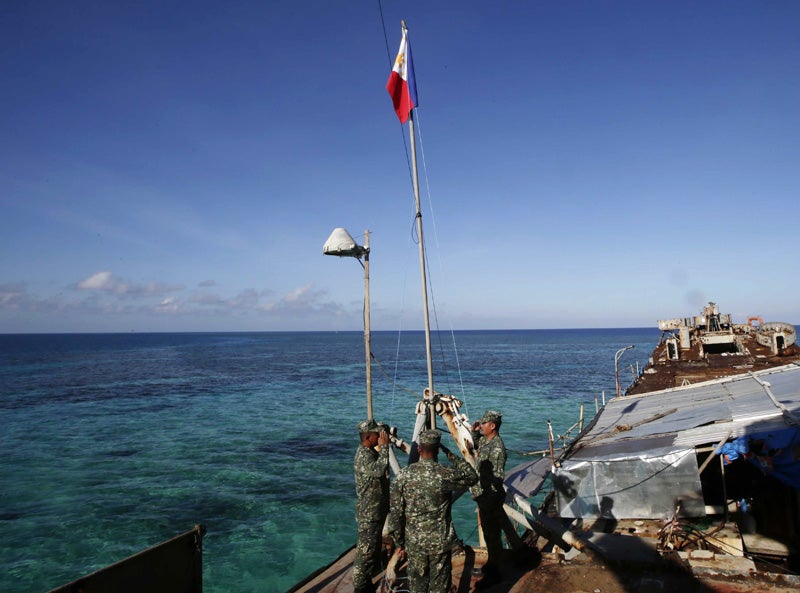 In this March 30, 2014, file photo, Philippine Marines raise the Philippine flag on the first day of their deployment on the dilapidated navy ship LT57 BRP Sierra Madre at the disputed Second Thomas Shoal, locally known as Ayungin Shoal, off the West Philippine Sea. AP PHOTO/BULLIT MARQUEZ

MANILA, Philippines —  After invoking the country’s arbitral victory against China before the United Nations, the next step for President Rodrigo Duterte is to put this into reality, former Foreign Secretary Albert Del Rosario said Wednesday.

During his debut at the UN General Assembly (UNGA), Duterte asserted the 2016 ruling of the UN-backed Permanent Court of Arbitration in The Hague which invalidated China’s claim in the entire South China Sea, including the West Philippine Sea.

“We certainly welcome the fact that President Duterte invoked the 2016 arbitral award won by the Philippines against China regarding the South China Sea at the 75th UN General Assembly,” Del Rosario said in an interview over ABS-CBN News Channel.

“By invoking the arbitral award, the President has acted more faithfully to our Constitution which mandates him and our military to secure our country sovereignty and protect our lands and seas.”

“The next step is for our President and his administration to put in reality the invocation of the arbitral award. Our government should work more earnestly to get the support of more countries so that the arbitral award will be raised next year for the UNGA 2021,” he added.

Del Rosario also welcomed Duterte’s statement thanking other nations that have backed the Philippines’ claims over the heavily disputed waters.

Recently, the United Kingdom, France and Germany rejected China’s expansive claims in the South China Sea through a joint note verbale submitted to the UN.

Del Rosario has repeatedly urged Duterte to raise the arbitral tribunal’s ruling in favor of the Philippines and rally support from members of the United Nations.

But Foreign Secretary Teodoro Locsin Jr. had rejected this proposal, saying it “doesn’t make any sense” and doing it only re-litigates something the country has already won.

“We hope that this puts to rest that bringing the arbitral award to the UNGA is relitigating the case. All Filipinos should now unite so that the world will help our country and fore the arbitral award against China,” Del Rosario said.

“Let us not allow this opportunity to be put to waste. We deeply thank you President for defending what is ours,” he went on.

Del Rosario noted that the government should “work more earnestly to get the support of more countries so that the arbitral award will be raised next year for the UNGA 2021.”

China has consistently refused to acknowledge the 2016 ruling of the UN-backed Permanent Court of Arbitration in The Hague which invalidated its claim in the entire South China Sea.

Its reclamation activities and militarization in the heavily contested area have also raised concerns on peace and stability in the area.