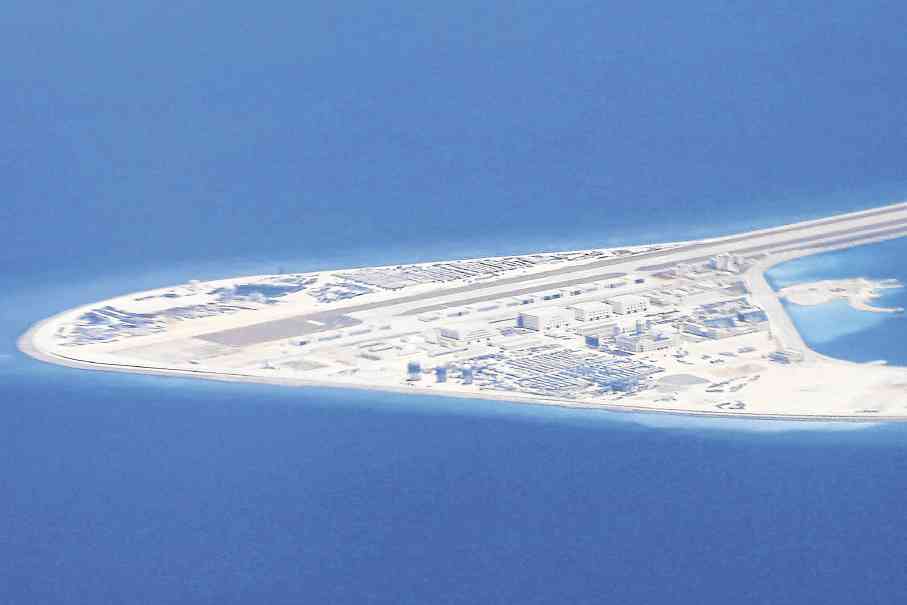 Chinese structures and an airstrip on the man-made Subi Reef at the Spratly archipelago in the South China Sea are seen from a Philippine Air Force C-130 transport plane on Friday. —AP

MANILA, Philippines — Citing the Philippines’ victory in the Permanent Court of Arbitration (PCA) in The Hague, the United Kingdom, France and Germany rejected China’s expansive claims in the South China Sea.

In a joint note verbale submitted to the United Nations in New York on Wednesday (Thursday in Manila), the three European nations said China’s “historic” claims in the South China Sea do not adhere with international law and with provisions under the United Nations Convention on the Law of the Sea (UNCLOS).

“France, Germany and the United Kingdom also highlight that claims with regard to the exercise of ‘historic rights’ over the South China Sea waters do not comply with international law and UNCLOS provisions and recall that the arbitral award in the Philippines v. China case dating to 12 July 2016 clearly confirms this point,” it read.

Further, they said all maritime claims in the highly-contested waters “should be made and peacefully resolved in accordance with the principles and rules of UNCLOS and the means and procedures for the settlement of disputes provided for in the Convention.”

“This position is reaffirmed without prejudice to competing claims of coastal states over disputed territorial sovereignty to naturally formed land features and to areas of the continental shelf in the South China Sea on which France, Germany and the United Kingdom take no position,” their note verbal read.

The UK, France and Germany are all state parties to the UNCLOS.

China has long been pushing for its sweeping claims in the South China Sea.

It refuses to recognize the 2016 ruling of the PCA invalidating Beijing’s claims over the entire South China Sea and upholding the Philippines’ rights over its 200-nautical mile exclusive economic zone under the UNCLOS.

China’s reclamation activities and militarization in the heavily contested area have also raised concerns on peace and stability in the area.

In response, the Chinese Embassy in Manila had claimed that the arbitration award was illegal and invalid.