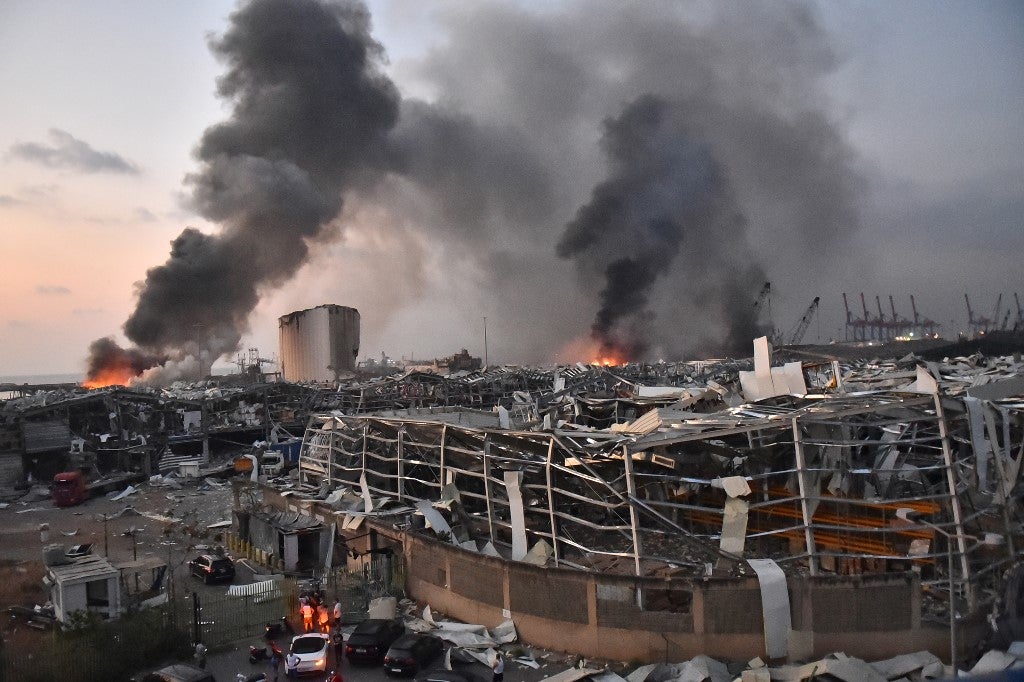 EDITORS NOTE: Graphic content / This picture taken on August 4, 2020 shows a general view of the scene of an explosion at the port of Lebanon’s capital Beirut. – Two huge explosion rocked the Lebanese capital Beirut, wounding dozens of people, shaking buildings and sending huge plumes of smoke billowing into the sky. Lebanese media carried images of people trapped under rubble, some bloodied, after the massive explosions, the cause of which was not immediately known. (Photo by STR / AFP)

MANILA, Philippines — Malacañang on Wednesday expressed solidarity with Lebanon following blasts in its capital Beirut that led to the death of at least a hundred people, including two Filipinos.

“The Philippines is in solidarity with the people of Lebanon in this period of great grief. Our thoughts and prayers are with the Lebanese people,” presidential spokesperson Harry Roque said in a statement.

“We are one with the families and friends of Filipinos who passed or were injured during the event,” he added.

The Department of Foreign Affairs (DFA) reported two Filipinos died, eight were injured while 12 were reported missing following the blast in Beirut.

“The Department of Foreign Affairs has been instructed to assist all Filipinos affected by the explosions through the Philippine Embassy in Beirut,” Roque said.

At least a hundred people died and around 4,000 were reported injured following the explosion that shook Beirut, the Lebanese Red Cross said.

Lebanon’s Prime Minister Hassan Diab said the explosion stemmed from 2,750 tonnes of agricultural fertilizer ammonium nitrate that had been stored in a portside warehouse for years.