MANILA, Philippines (Updated) — Two Filipinos were killed in powerful explosions that hit the Port of Beirut in Lebanon, the Department of Foreign Affairs (DFA) confirmed Wednesday.

Citing latest reports from the Philippine Embassy in Beirut, the DFA also said that eight other Filipinos have been injured.

The two Filipinos who died and the six who injured were all inside their employers’ home during the explosions, according to the DFA.

In an online briefing, DFA Undersecretary Sarah Arriola disclosed that the two additional Filipinos injured were seafarers aboard a ship that was docked 400 meters away from the explosion’s location.

The two seafarers are among the 13 who jumped from their ship after the explosion took place, Arriola said.

“The additional two injured currently recuperating at the Embassy chancery after receiving treatment from the hospital are part of the 13 group of Filipino seafarers whose ship was docked 400 meters away from the blast zone,” Arriola said.

“Eleven of the said seafarers have been reported missing. In addition, one Filipino household service worker has also been reported as missing, bringing the total number of missing Filipinos to 12,” she went on.

“The Philippine Embassy is in touch with the Filipino community in Lebanon to assess the situation and provide assistance to any affected Filipinos,” the DFA said in a statement.

The embassy said there could still be other Filipinos injured in the humongous blasts that devastated Beirut’s port in Lebanon on Tuesday.

(As of now, we have confirmed six injured, but there could be more Filipinos who sustained injuries whom we have not yet contacted.)

(The explosions happened in the port but the impact of the shockwave was wide. Even us in the embassy outside Beirut felt the shockwave, so it is possible that there could be more who were injured from collapsed buildings.) 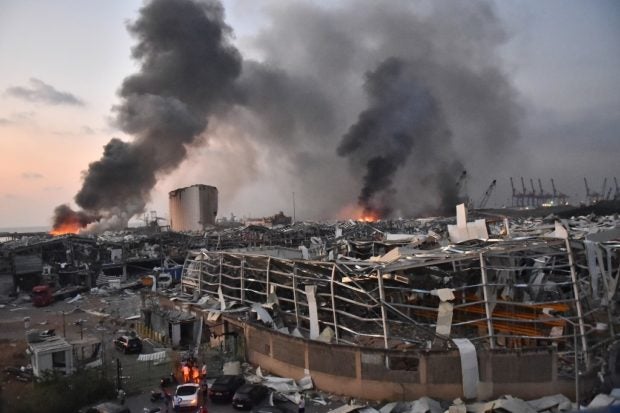 This picture taken on August 4, 2020 shows a general view of the scene of an explosion at the port of Lebanon’s capital Beirut. Two huge explosion rocked the Lebanese capital Beirut, wounding dozens of people, shaking buildings and sending huge plumes of smoke billowing into the sky. Photo by STR / AFP

According to the DFA, there are approximately 33,000 Filipinos in Lebanon, 75 percent of them in the Greater Beirut area.

Reports said the Lebanon’s health ministry reported 73 dead and 3,700 injured across wide parts of the country’s capital city due to the explosions.

Lebanon’s Prime Minister Hassan Diab was quoted as saying that 2,750 tonnes of the agricultural fertilizer ammonium nitrate that had been stored in a portside warehouse for years had blown up.