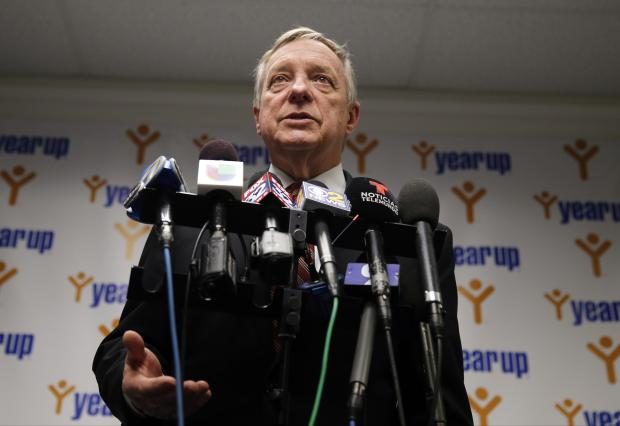 MANILA, Philippines — The Duterte administration’s “strong-arm tactic” of imposing visa restrictions is an “insult to the Filipino-American community,” a U.S. senator said Tuesday.

“The Duterte regime should stop threatening the travel of these Filipino Americans and so many others who travel between our nations, and instead release Senator de Lima or assure a quick and credible trial,” U.S. Senator Richard Durbin (D-Illinois) said in a statement.

Read my statement on the continued detention of Philippine Senator Leila de Lima by the government of the Philippines and President Rodrigo Duterte: pic.twitter.com/e4nsS8rvuy

“This strong-arm tactic is an insult to the Filipino American community and the country’s democracy,” he added, noting that Illinois “is proudly home to a vibrant, hardworking Filipino community.”

Durbin, along with U.S. Senator Patrick Leahy, earlier introduced an amendment to the 2020 State and Foreign Operations Appropriations Bill which sought to ban U.S. entry to Philippine officials proven to be behind the “wrongful imprisonment” of Senator Leila de Lima.

This prompted President Rodrigo Dutere to order the Bureau of Immigration to deny the entry of Durbin and Leahy into the Philippines.

“The President is immediately ordering the Bureau of Immigration to deny U.S. Senators Dick Durbin and Patrick Leahy, the imperious, uninformed and gullible American legislators who introduced the subject provision in the U.S. 2020 Budget, entry to the Philippines,” presidential spokesperson Salvador Panelo earlier said in a Palace briefing.

The Palace official added that should the U.S. enforce the said ban, the Philippines will be requiring Americans to secure visas before entering the country.

In calling for the release of De Lima, Durbin said the Philippine senator “has been jailed for more than 1,000 days on highly questionable charges.”

“Her release, which has been championed by groups such as Amnesty International – and now the U.S. Congress – is unfortunately symbolic of the larger price one increasingly pays for peaceful dissent and honest journalism under President Duterte in the Philippines,” Durbin said.

“These voices, like De Lima’s and Rappler journalist Maria Ressa’s, face harassment and imprisonment for fostering honest coverage regarding the country’s sweeping extra-judicial killings, which is an affront to the cherished democratic norms we share with our long standing Filipino allies,” he added.