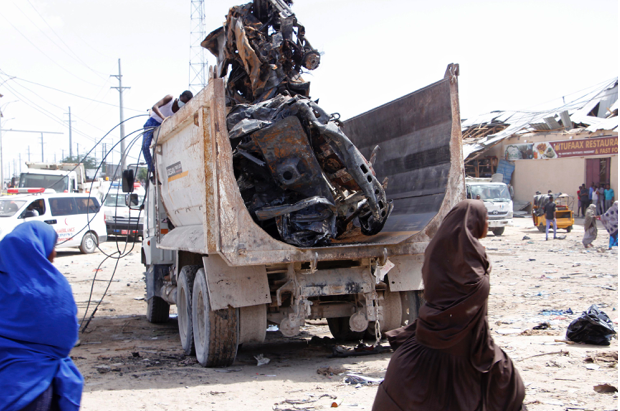 A truck carries wreckage of a vehicle used in a car bomb in Mogadishu, Somalia, Saturday, Dec. 28, 2019. A truck bomb exploded at a busy security checkpoint in Somalia’s capital Saturday morning, authorities said. It was one of the deadliest attacks in Mogadishu in recent memory. (AP Photo/Farah Abdi Warsame)

MANILA, Philippines — No Filipino was reported injured in a recent bombing in Somalia’s capital, the Department of Foreign Affairs (DFA) said.

In a statement on Sunday, the DFA said the Philippine Embassy in Nairobi, which has jurisdiction over Somalia, reported that no Filipino was involved in the tragic incident.

The DFA, likewise condemned Saturday’s truck bombing in Somalia, which killed at least 79 civilians, many of which are students.

“The Philippines has long been in the forefront of the fight against terrorism and extreme violence and supports international efforts to eradicate them,” the DFA said.