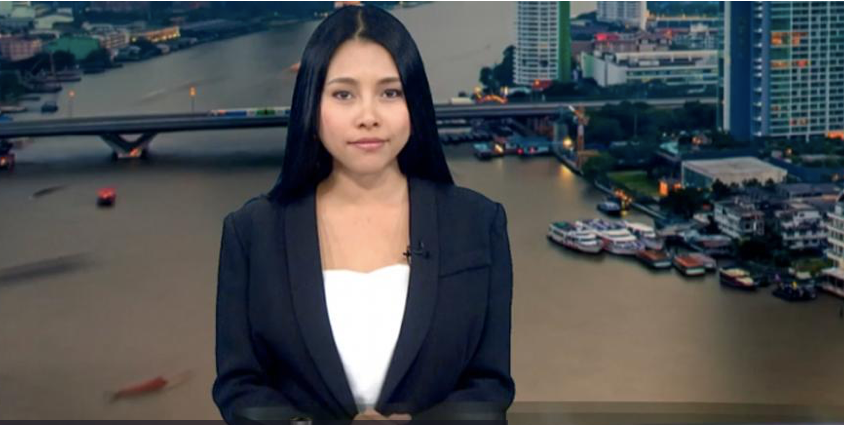 A screenshot from “Weekly Focus,” the information program Suchanee Cloitre now hosts on NBT World TV channel, which was also posted on the website of Reporters Without Borders. (image: Youtube – DB / RSF)

MANILA, Philippines — An international media watchdog condemned what it called a “draconian” two-year jail sentence meted out against a Thai journalist for reportedly defaming an agribusiness company in the central province of Lop Buri.

“We call on Lop Buri’s judges to recover a semblance of credibility by overturning Suchanee Cloitre’s absurd conviction on appeal,” Daniel Bastard, the head of RSF’s Asia-Pacific desk, said in a statement on Thursday.

“This grossly unfair sentence has the hallmarks of a justice system that despises journalistic freedom and sides with the powerful. It seems to have the sole of intimidating all of Thailand’s journalists,” he added.

Citing a report from an independent non-profit web newspaper, RSF said Suchanee was convicted of criminal defamation last December 24 “as a result of the suit the company brought against her in August 2016, when she worked for Voice TV.”

RSF noted, in an article published on its website, the suit against the Thai journalist stemmed from her tweet “about a court decision ordering poultry-rearing company Thammakaset to compensate 14 migrant workers who had been forced to work up to 20 hours a day on the company’s chicken farms while being paid less than the minimum wage and no overtime.”

“The company sued her on the grounds that she dared to describe the conditions as ‘slave labour’ in her tweet,” RSF’s article further read.

Two years in jail is the maximum sentence under Thailand’s criminal defamation laws, the group noted.

Suchanee posted bail amounting to 75,000 baths (2,250 euros) to avoid imprisonment pending the outcome of her appeal.

“Ever since the latest coup in 2014, Thailand’s military have imposed a relentless system for suppressing press freedom. The especially harsh defamation laws are often used to silence journalists who try to do their job,” RSF further noted.

“Last March’s parliamentary elections were marred by serious pluralism violations and Voice TV, the channel for which Suchanee used to work, was shut down for weeks during the campaign, as RSF reported at the time,” it added.

Thailand (136th) ranks two slots behind the Philippines (134th) out of 180 countries in the 2019 World Press Freedom Index released by RSF.