Duterte flies back to PH after 2-day Asean, Korea summit 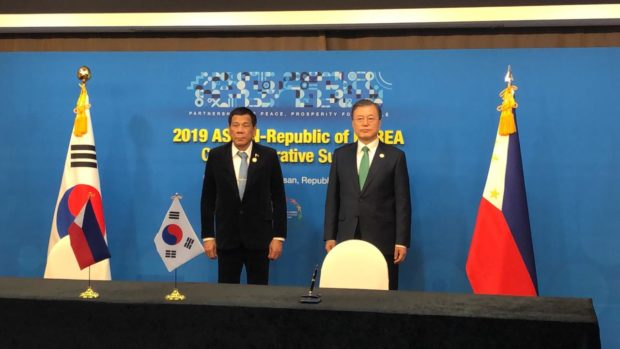 The President is expected to arrive in Manila at around 6:00 p.m. Tuesday.

South Korea and the Philippines failed to sign their free-trade agreement, but the countries vowed to conclude the deal early next year, possibly during Moon’s state visit to the Philippines.

On Tuesday, South Korea and Asean agreed to support complete denuclearization and permanent peace in the Korean peninsula as Moon asked them to constantly send a “unified message” to North Korea and the United States on the need for the early resumption of working-level denuclearization talks.

The 30th Asean-ROK Commemorative Summit gathered from Monday to Tuesday leaders of the 10 Asean-member states to discuss three decades of partnership with Korea, as well as to tackle pressing issues.