No mention of South China Sea issue in Duterte-Moon talks 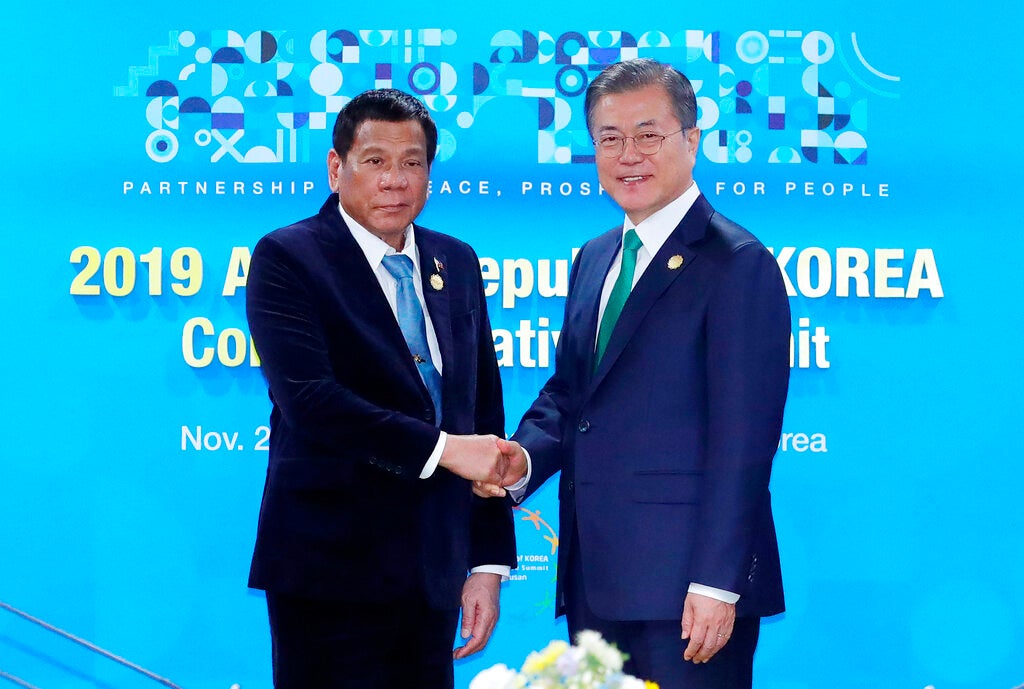 “Wala, hindi nabanggit ‘yun [No, that was not mentioned],” Defense Secretary Delfin Lorenzana said in an interview in this port city when asked if Duterte raised the SCS issue with Moon which the President said he would do.

Lorenzana said Duterte instead renewed the Philippines’ support to South Korea and its calls for denuclearization in the peninsula.

The defense chief also expressed hopes that the Philippines and South Korea could conclude by December their negotiations on the purchase of two corvettes worth P55 billion. The small frigates may be used to patrol southern parts of the country, according to Lorenzana.

(We’re still finding ways to finance the purchase of corvettes, we’re still negotiating. I actually want the negotiations to end this December so we could sign the contract and start building the corvettes by January, and deliver them within three years before the President finishes his term.)

“They can give us generous financing that we can pay maybe in a period of three to five years,” he added.

“The arrangement is expected to allow more South Korean companies to be able to make contracts with the Philippine government so as to promote their defense exports to the Southeast Asian country,” the arms procurement agency said in a release.

“[The two sides will] promote and facilitate dialogue and cooperation, including through Asean-led mechanisms, to support complete denuclearization and the establishment of permanent peace on the Korean Peninsula in a peaceful manner,” the statement read.

Leaders of the Association of Southeast Asian Nations (Asean) are in South Korea from Monday to Tuesday to attend this year’s Asean-Republic of Korea Commemorative Summit and celebrate the 30th anniversary of their dialogue partnership.

Read Next
Democrats woo Fil-Ams in Nevada; offer caucus materials in Tagalog
EDITORS' PICK
DOH: Too early to say COVID-19 cases are declining
Duterte praises military but slams police for poor discipline, corruption
Acer starts the year off strong with the Aspire Vero National Geographic Edition
The best of bayside and city living at SMDC’s Sail Residences
COVID-19 cases surging in all regions and provinces, says DOH
Over 3 Million worth of prizes to be won at Smart Padala’s SENDali Manalo Promo!
MOST READ
Marcos Jr. visits Cebu, stands as ‘ninong’ to mayor’s son
Duterte praises military but slams police for poor discipline, corruption
Djokovic has to comply with rules to go to Spain, PM says
Comelec junks petition to scrap Bongbong Marcos COC
Don't miss out on the latest news and information.