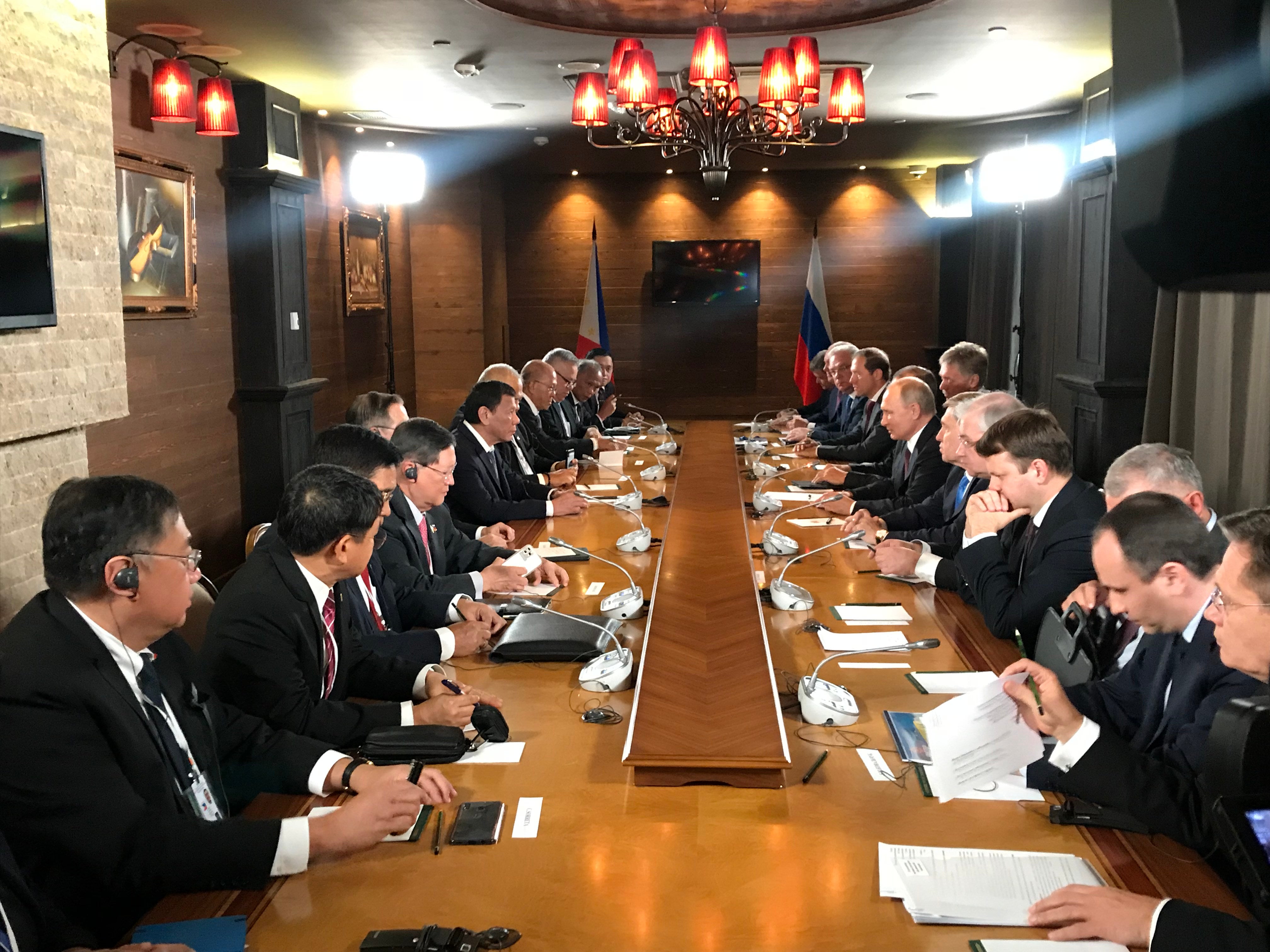 SOCHI, Russia — President Rodrigo Duterte on Thursday reaffirmed the Philippines’ commitment to build a vigorous partnership with Russia as he met his counterpart, President Vladimir Putin, for the fourth time.

In delivering his opening statement, Duterte underscored “historic firsts” between the two countries.

“I am here today to reaffirm our strong commitment to build a robust and comprehensive partnership with the Russian Federation,” Duterte, who was accompanied by several of Cabinet secretaries, told Putin.

“In the past two years, we have seen a dramatic increase in bilateral activities across many areas of cooperation at various levels of government. We have also made historic firsts in the key strategic areas from economic defense, security and military technical cooperation,” he added.

“This was highly a political issue and importance given that a few years back this would have been unthinkable,” he said.

“We have established high-level consultative mechanism between our foreign ministries, national security councils, and economic agencies,” he added.

This is an effort to “take stock of our engagement in defense, security and law enforcement matters and to exchange views of other issues affecting our countries,” Duterte said.

“It is imperative to sustain these consultative dialogues and enhance our mechanism to further strengthen the foundation of our growing relationships,” he pointed out.

The Philippine leader further said he was “happy” to have the opportunity to foster Philippine-Russia relations.

“I am therefore happy with this opportunity to continue our dialogue with the view of identifying vital areas of cooperation, which where we should concentrate our efforts in the coming years,” he said.

Duterte also took note of the defense cooperation the Philippines sealed with Russia in 2017.

“We have the exchanges of high-level visits between our defense and security officials as well as the port calls of…our two navies,” he said.

“I am pleased that for the first time also a Philippine Navy vessel sailed to Russia to participate in the naval parade in Vladivostok on the Russian Navy Day,” he added.

Putin, likewise, welcomed Duterte to Russia as the former expressed his country’s readiness to “develop our partnership when it comes to countering terrorism and share our experience and all the developments.”

The President’s bilateral meeting with Putin was one of the highlights in his second visit here.

After their meeting, the President is set to address the plenary session of a Russian think tank’s forum.

READ: Duterte to speak at Valdai forum during visit to Russia

“The presence of the President of the Philippines at the Valdai Discussion Club especially when we talk about such an important topic is of utmost importance to us and I hope that your presence here would give significance to the event we have today,” Putin said during their bilateral meeting. /jpv