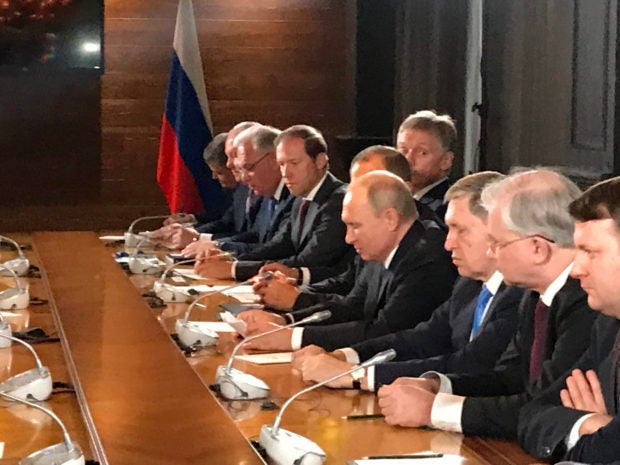 The two leaders met once again as Duterte embarks on his second visit to Russia.

“I would like to highlight that the Philippines is a very important partner of Russia in Asia. Our bilateral cooperation is constructive and mutually beneficial…,” Putin told Duterte in a bilateral meeting here.

Putin, who recalled the Philippine leader’s previous visit in 2017, lauded Duterte for managing “to lower the level of the terrorist threat in your country and to strengthen the potential of your security [forces]” over the last two years.

“I remember that during your last visit to Russia in May of 2017, you had to cut it short and return to the Philippines due to terrorist attacks committed by ISIS terrorists,” he said.

Putin also highlighted Duterte’s contribution to expanding the “multifaceted cooperation” between the Philippines and Russia.

“And in large part due to your personal attention, we have revitalized our political dialogue” he added.

Putin also took note of the success the two countries have reached in terms of trade and economic cooperation.

“Last year, our trading has grown two-fold. So it was more than 1.2 billion dollars. And Russian export also grew four-fold,” he said.

“We have major reserves in place and Russian companies are ready to increase the supplies of energy carriers, aircraft, transport, special equipment,” he added.

He also expressed intent to increase Philippine-Russia industrial cooperation and the exploration of space and the use of digital technologies.

“It’s important to help establish direct ties between entrepreneurs. This is supported by the regular meetings of the Business Council, which was created back in 2009,” he further said.

Duterte, likewise, reaffirmed the Philippines’ commitment to build a “robust and comprehensive cooperation” with Russia./ac