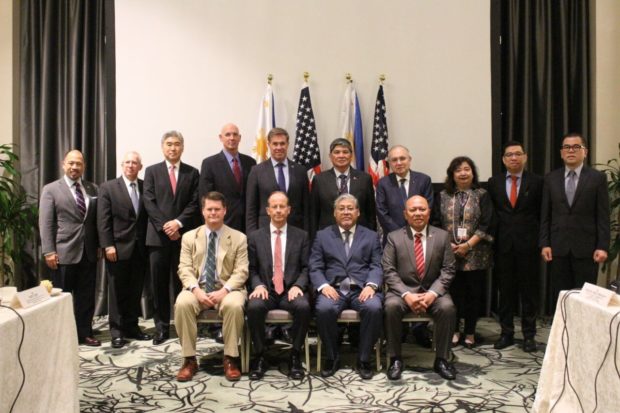 The Philippine and United States delegation to the 8th Philippines-United States Bilateral Strategic Dialogue, held on July 15 to 16, 2019, pose for the photo at the conclusion of the event. Photo by Vanessa Ubac/Department of Foreign Affairs

MANILA, Philippines — Defense relations between the Philippines and the United States are “very strong,” Philippine Ambassador to the U.S. Jose Manuel Romualdez said amid China’s militarization in the South China Sea.

“As far as the defense portion of the working group on defense and security, that was obviously discussed,” Romualdez told reporters in a chance interview on Tuesday after his joint press briefing with U.S. Ambassador to the Philippines Sung Kim, when asked if issues concerning the disputed waterway was raised during the 8th PH-US Bilateral Strategic Dialogue in Manila.

“Now we can continue to strengthen our relationship, again the United States will continue its [freedom of navigation operations] but in general terms [the] relationship, it’s there, it’s very strong,” he further said.

In a press statement issued after the Philippines and the U.S. ended its two-day dialogue, United States Assistant Secretary of State for East Asian and Pacific Affairs David Stilwell said the Philippines is “well-positioned” to ensure the consistency of the Association of Southeast Asian Nations (Asean) code of conduct text with the international law.

“As a claimant state in the South China Sea, the Philippines is well-positioned to ensure that the ASEAN code of conduct text is fully consistent with international law, protecting the freedom of navigation and overflight and other lawful uses of the sea for all countries, as well as the rights of claimant states to pursue security and development arrangements with partners of their choosing,” Stilwell said.

“As a treaty ally, our partnership with the Philippines is critical for realizing our shared vision for a free and open Indo-Pacific, with thriving sovereign nations,” he further explained.

“Discussions in the mutual defense treaty was really more on how we would continue,” he said in a media briefing.

“This is something that’s ongoing and we probably will continue to do that and I think there’s one scheduled for some time in September,” he added.

He further noted that a review of the MDT was not discussed during the recently concluded talks.

For his part, Kim echoed Romualdez in noting that the MDT discussions “will continue.”

“In the context of discussion of how we can strive to strengthen our already robust alliance, we talked about mutual defense treaty and those discussions will continue,” Kim said.

The U.S. has repeatedly expressed commitment to stand by its obligations under the MDT.

U.S. Secretary of State Mike Pompeo in March assured that the U.S. government remains “committed” to the MDT with the Philippines.

“China’s island-building and military activities in the South China Sea threaten your sovereignty, your security and therefore economic livelihood as well as that of the United States,” Pompeo said in a joint press conference, with Philippine Foreign Secretary Teddy Locsin Jr., during his visit to Manila.

Under Article 4 of the MDT, each party “would act to meet the common dangers in accordance with its constitutional processes” should there be an armed attack in the Pacific area.

Early July, Kim reaffirmed the commitment given by Pompeo a few weeks after Sen. Panfilo Lacson said the Philippine government should not wait for armed aggression to happen in the West Philippine Sea before invoking the MDT.

READ: US stands by obligations to PH under MDT – envoy

This assurance comes in the wake of the June 9 Recto Bank (or Reed Bank) incident which left 22 Filipino fishermen abandoned at sea for hours after their boat was rammed by a Chinese vessel and shortly after China reportedly conducted missile tests in the South China Sea.

The South China Sea is a vital economic sea lane in the Asian region as well as in international navigation, but China’s reclamation activities and militarization in the contested waterway have raised concerns on peace and stability in the area.

However, China has been insisting that the facilities it built on reclaimed islands in the South China Sea are primarily for civilian purposes.

The Philippines, China, Taiwan, Vietnam, Malaysia, and Brunei have conflicting claims over the South China Sea.

The United States, a non-claimant country, conducts freedom of navigation operations in the contested waters.

In 2013, the Philippines filed a case before the Permanent Court of Arbitration (PCA) at The Hague in The Netherlands challenging China’s nine-dash line, which covers almost all of the South China Sea.

But the arbitral tribunal in a decision issued in July 2016 favored the Philippines’ case and invalidated China’s nine-dash line.

President Rodrigo Duterte, however, has opted to set aside the historical ruling and instead fostered warmer ties with Beijing in exchange for economic favors for the Philippines. /muf