US vows PH defense vs attack in South China Sea 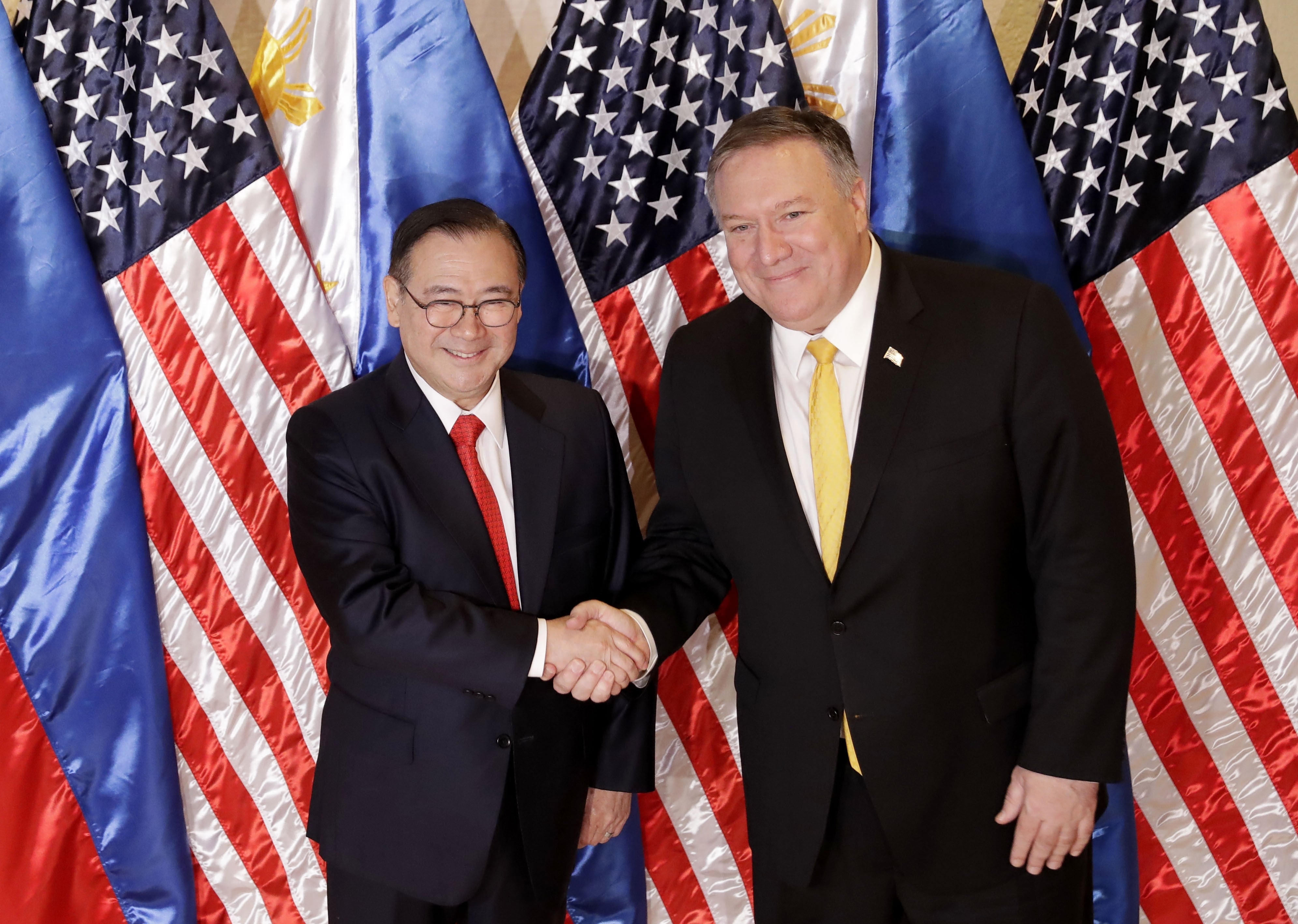 US ASSURANCE US Secretary of State Mike Pompeo (right) meets Foreign Secretary Teddy Locsin Jr. on Friday giving assurance that Washington would fulfill its treaty obligation to defend the Philippines in case of an armed attack in the South China Sea, the first time an American official made such a commitment to come to the defense of its poorly armed ally locked in a maritime dispute with China. —BULLIT MARQUEZ/AP

US Secretary of State Mike Pompeo on Friday said the United States would defend the Philippines against any “armed attack” in the South China Sea and was committed to ensuring that China “does not pose a threat” that could close the strategic waterway.

Speaking during a stopover in Manila after the US-North Korea summit in Vietnam, Pompeo said the United States would fulfill its obligations under the 1951 Philippine-US Mutual Defense Treaty (MDT) if the Philippines fell victim to aggression and singled out China as a threat to stability.

“China’s island-building and military activities in the South China Sea threaten your sovereignty, your security and therefore economic livelihood as well as that of the United States,” he said during a joint press conference with Foreign Secretary Teddy Locsin Jr.

Article 4 of the MDT states that in case of an armed attack in the Pacific area, each party “would act to meet the common dangers in accordance with its constitutional processes.”

Pompeo’s comments marked the first time any US official had publicly stated Washington’s intent to defend its poorly armed ally specifically in the disputed maritime region.

“Our commitments under the treaty are clear. Our obligations are real,” Pompeo said.

“We remain committed to supporting not only the Philippines in that effort, and the Philippines needs to do its part as well, but all the countries in the region so these incredibly vital sea-lanes remain open and China does not pose a threat to closing them down,” Pompeo stressed.

Pompeo arrived on Thursday night and immediately met with President Duterte at Villamor Air Base. He discussed the unsuccessful talks between President Donald Trump and North Korean leader Kim Jong-un in Hanoi.

Presidential spokesperson Salvador Panelo said that during the 45-minute meeting, President Duterte highlighted the prospects of stronger ties with the United States, particularly on defense and security, peace and order as well as the rule of law in the conduct of activities in the South China Sea.

He said President Duterte thanked the United States for the return of the historic Balangiga bells last year.

Washington has said it is not taking sides in the dispute among the Philippines, China, Vietnam, Taiwan, Brunei and Malaysia over the whole or parts of the South China Sea.

The United States, however, has been asserting its right to freely sail over the waters through freedom-of-navigation operations, which have irritated China.

Defense Secretary Delfin Lorenzana has been seeking a review of the treaty to clarify the extent to which the United States will protect and defend the Philippines should it come under attack.

Lorenzana’s push for greater certainty comes amid a rapid buildup by Beijing of military assets, coast guard and fishing militia in the South China Sea, most notably on and around artificial islands in the Spratly archipelago.

Mr. Duterte has questioned the United States’ commitment, noting that it did nothing to stop China from turning reefs into islands equipped with radar, missile batteries and hangars for fighter jets, and within firing distance of the Philippines.

Locsin said he saw no immediate need to amend the treaty and that its “vagueness” gave it its “deterrent” character.

“Specificity invites evasion and actions outside the MDT framework. But too much vagueness lends itself to doubt the firmness of commitments. For the time being, helping the Philippines build up our self-defense capacity should do it,” Locsin said.

He said he did not believe “American sincerity” could only be shown in detailing US response to security threats to the Philippines.

“They will respond depending on the circumstances,” he said. “But we are very assured, we are very confident that the United States has, in the words of Secretary Pompeo and the words of President Trump to our President, ‘We have your back.’”

Lorenzana told reporters he wanted to flesh out “ambiguities” regarding US actions under the treaty.

For one, he said it wasn’t clear what the United States would do in case of “aggression that is not violent.”

“We weren’t attacked. Our islands were just grabbed. Where will that fall under (in the treaty)?” Lorenzana said.

Asked whether he thinks China’s incursions were due to ambiguities in the treaty, he said: “I believe so.” In addition to that is the US stand not to interfere in the territorial disputes, “so the Chinese got a blanket authority to grab reefs in the West Philippine Sea,” according to Lorenzana.

He agreed that some vagueness in a treaty was good, but one of the bad things about that is it would slow down responses when incidents called for immediate action.

Delay in US response

Lorenzana noted the treaty had not been ratified by the US Congress, so the pact would not “automatically kick in” in case of an incident requiring urgent action. The US side would still go through its “constitutional processes,” causing a possible delay in American response, he added.

Amid growing tension caused by the maritime dispute and deteriorating ties between the Philippines and China in 2013, Manila challenged Beijing’s sweeping claims in the Permanent Court of Arbitration in The Hague.

In July 2016, the court ruled to invalidate China’s claims.

The tension greatly eased after Mr. Duterte took office and set aside the ruling in favor of friendlier ties between the two countries. In return, China pledged billions of dollars in loans, aid and investments to help his ambitious infrastructure program. — WITH REPORTS FROM AFP, AP