US stands by obligations to PH under MDT – envoy | Global News

US stands by obligations to PH under MDT – envoy 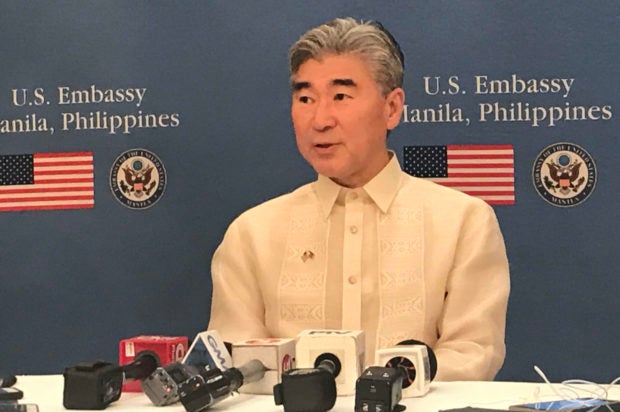 United States Ambassador to the Philippines Sung Kim answers question from the media before the 243rd commemoration of the United States’ Independence Day in Makati on Wednesday, July 3, 2019. Photo by CHRISTIA MARIE RAMOS / INQUIRER.net

“Under the Mutual Defense Treaty (MDT), all I can say is to refer to what [U.S.] Secretary of State [Mike] Pompeo made very clear during his visit to the Philippines a few months ago,” Kim told reporters in a press briefing.

“If there is an armed attack against Philippines’ forces, Philippines’ aircraft, Philippines’ public vessels, it will trigger our obligations under the Mutual Defense Treaty and we stand by that,” he added.

Kim’s statement came a few weeks after Sen. Panfilo Lacson said the Philippine government should not wait for armed aggression to happen in the West Philippine Sea before invoking the MDT.

This development comes weeks after the June 9 Recto Bank (or Reed Bank) incident which left 22 Filipino fishermen abandoned at sea for hours after their boat was rammed by a Chinese vessel.

Treaty with US is only ‘weapon’ in PH arsenal, says Lacson

Lacson on invoking MDT: Better if both sides militarize in West PH Sea not just China

During Pompeo’s visit to Manila last March, he assured that the US government remains “committed” to the MDT with the Philippines.

“We remain committed to supporting not only the Philippines in that effort, and the Philippines needs to do its part as well, but all the countries in the region so these incredibly vital sea-lanes remain open and China does not pose a threat to closing them down,” Pompeo earlier said.

Article 4 of the MDT states that in case of an armed attack in the Pacific area, each party “would act to meet the common dangers in accordance with its constitutional processes.”

“I think Secretary Pompeo was quite clear when he made that statement in the Philippines and, in fact, he conveyed that commitment directly to President (Rodrigo) Duterte in his meeting with the President,” Kim said.

The South China Sea is a vital economic sea lane in the Asian region but China’s reclamation activities and militarization in the contested waterway have raised concerns on peace and stability in the area.

But China insists the facilities on its man-made islands are primarily for civilian purposes.

According to Kim, the U.S. continues to conduct freedom of navigation operations in the contested waterway “to make clear to all countries, including the claimant countries, that we will do what is necessary to protect those international rights.”

“We’re not a claimant in the dispute and we have not tried to intervene on the resolution of the dispute. All we have said—and I think our position has been quite clear and consistent—is that we believe freedom of navigation, freedom of flight are important international rights that should be protected,” the US ambassador said.

“And I should mention that those are rights not only beneficial to the United States but all of us benefit from protecting freedom of navigation,” he added.

Asked for a comment on the President’s challenge to Western powers, including the U.S., to help Manila defend its interests in the South China Sea, Kim said that maritime disputes should be resolved in accordance with international laws.

“And that individuals countries should refrain from aggressive unilateral actions,” he added.