China’s rise ‘an opportunity, not a threat’ – Arroyo | Global News

China’s rise ‘an opportunity, not a threat’ – Arroyo 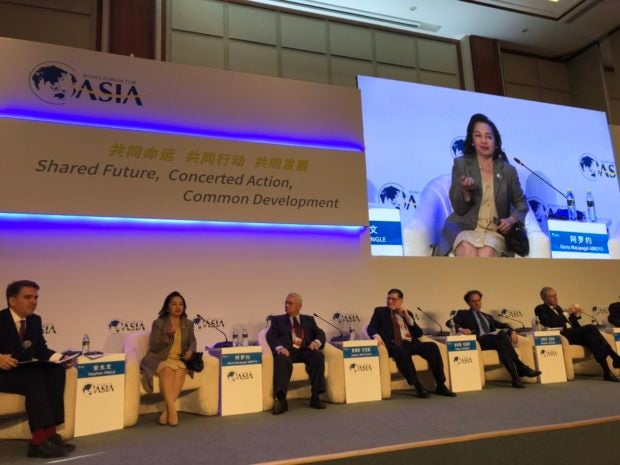 Photo from the Office of Speaker Gloria Macapagal-Arroyo

MANILA, Philippines — The world should look at China’s rise as “an opportunity rather than a threat,” House Speaker Gloria Macapagal-Arroyo has insisted despite criticisms that infrastructure loan deals between the Philippines and China would be “detrimental” to the country.

“… China’s effort in opening up has really been a boost for the economies of the world, especially the developing economies. The world should look at China’s rise as an opportunity rather than a threat,” the former President told reporters Thursday when she attended the Boao Forum for Asia (BFA) Annual Conference in Hainan, China.

She is a member of the Board of BFA, which gathers together leaders in government, business, and academic institutions throughout Asia to share their thoughts on the most pressing issues in the region and the world.

The Pampanga congresswoman said China “is a market, a donor and a provider of capital and technology” for developing countries.

“You know, when China was beginning to develop, about six years into its transformation, I was undersecretary of trade and industry, and we were looking at this economic dragon that was rising in Asia, and we were wondering when China would become a competitor in the world,” Arroyo recounted.

“Little did we know that China is in a class of its own, and now, 40 years later under the presidency of Xi Jinping, it has become a partner in development. China, for us in the developing countries, is a market, a donor and a provider of capital and technology,” she continued.

The Philippines, she pointed out, has become China’s “no. 1 trading partner.”

The lawmaker also mentioned that China has been a “major source of assistance to some of the Philippines’ major infrastructure projects,” as well as a “major market for Filipino-Chinese businessmen.”

In 2018, the Philippines and China signed a memorandum of understanding (MOU) for oil and gas development cooperation, as well as 28 other agreements on trade, infrastructure, and education programs.

Makabayan senatorial candidate Neri Colmenares, however, said the Kaliwa Dam deal has “onerous conditions” that are “detrimental to the Filipino people.” He also featured, via a video documentary, some Filipino fishermen from Masinloc, Zambales who said Chinese Coast Guard usually seize their catch and force them to go away from the Scarborough or Panatag Shoal which has been a traditional fishing ground for them.