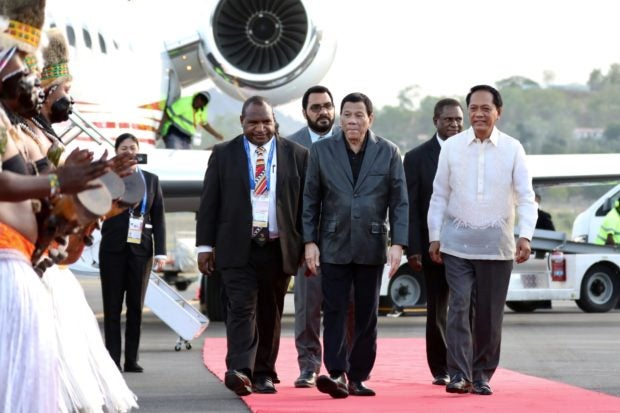 President Rodrigo Duterte had a “fruitful” and “productive participation” in the Asia-Pacific Economic Cooperation (Apec) Leaders’ Meeting held in Papua New Guinea on Nov. 17 and 18, according to Malacañang Palace.

In a statement issued on Sunday, presidential spokesperon Salvador Panelo said: “He, together with 20 economic leaders, joined in the dialogue before prominent business leaders during the summit of chief executive officers of the APEC Business Advisory Council or ABAC.”

The President also met with leaders of the Pacific Islands Forum and and had a dialogue with the International Monetary Fund, Panelo added.

Panelo said that the President “actively” engaged with the leaders of neighboring countries as well as “friends and allies in APEC” in “important discussions.”

The President also “advanced our country’s priorities” during the meeting, which the Palace considered as “the most important economic cooperation platform in the world.”

Panelo said the President also affirmed his commitment to continuously participate in the Apec Forum, adding that 84 percent of the country’s total trade worldwide are with Apec economies.

According to Panelo, Papua New Guinea is home to about 40,000 Filipinos and 200 Philippine companies.

“With the President’s undiminished dedication to our country’s economic progress and the formidable support he was able to solicit from the respective leaders of the APEC Community,” Panelo said. “We are enthusiastic to say that this trip not only benefited our country today but also its overall economy in the following years.”

Earlier, a Palace advisory said that the President would cut his trip to Papua New Guinea a day short, but reports said that Duterte decided to finish the two-day summit.

Before flying out to Papua New Guinea, Duterte was in Singapore where he attended the Association of Southeast Asian Nations (Asean) Summit.

There he skipped six key events during the summit, prompting criticisms and concerns for his health after the Palace revealed that the President “took power naps to catch on sleep,” hence his absence in the some of the Asean events.

According to Panelo, however, the President is “is in top physical shape” despite his “constantly punishing work schedule.” /atm