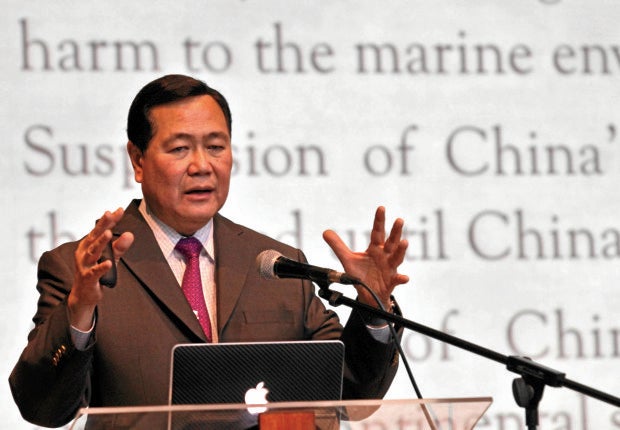 The acting chief justice, one of the leading figures in the Philippines’ arbitration victory against China, lauded the President for his support to freedom of navigation and said this was the “most welcome development in resolving the South China Sea dispute.”

China claims nearly the entire South China Sea, including waters within the exclusive economic zones of Brunei, Malaysia, the Philippines, Vietnam, and Taiwan.

In July 2016, the Permanent Court of Arbitration in The Hague invalidated China’s sweeping claims in the South China Sea. But Mr. Duterte has downplayed the victory of the Philippines in favor of economic investments from China.

Economic deals and a possible framework agreement on joint exploration between the Philippines and China are expected to be signed when Chinese President Xi Jinping visits Manila this week.

On the sidelines of the Asean Summit last week, Duterte met with Japanese Prime Minister Shinzo Abe, where both leaders expressed “commitment to uphold the principles of freedom of navigation and overflight, freedom of commerce and other lawful activities, exercise of self-restraint, and the peaceful resolution of disputes.”

The United States and other powerful countries have been sailing both on the high seas and EEZs in the South China Sea to assert freedom of navigation in the hotly contested waterway.

“Freedom of navigation and overflight means all ships can sail in, and all aircraft can fly over, the high seas and exclusive economic zones of the South China Sea without securing the consent of, or giving prior notification to, the coastal states,” the acting top magistrate said.

Carpio’s statement comes days after he countered the President for his remark that China “is already in possession” of the South China Sea.

“China is in physical possession of the entire Paracels, 7 geologic features in the Spratlys, and Scarborough Shoal. These geologic features, and their territorial seas, constitute less than 8 percent of the total area of the South China Sea,” Carpio said last Friday.

“Factually, China is not in possession of the South China Sea.” /je