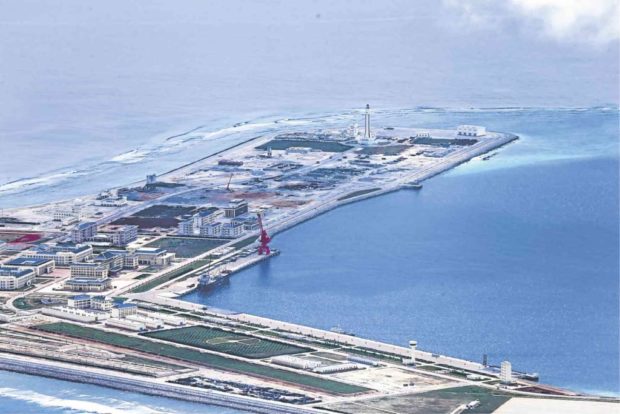 China has announced that it is sending one of its best search and rescue ships to the Spratly Islands in the South China Sea, a move seen as a subtle way to assert its claims amid tension over the disputed waters.

The ship Nan Hai Jiu 115, dispatched by the Nanhai Rescue Bureau of the Ministry of Transport, set sail for Zamora Reef (Subi) from the southernmost Hainan island province of China Friday last week and was expected to arrive last Monday, state-run newspaper China Daily said in a report early this week.

Zamora Reef is one of China’s three biggest artificial islands in the Spratlys. It is located 12 nautical miles from Pagasa Island (Thitu), the largest of the nine features occupied by the Philippines in the South China Sea and the only one inhabited by civilians.

A separate report by Xinhua news agency said that the ship will be “permanently stationed” in Zamora Reef. It also marked the first time a Chinese civilian rescue force has settled in the Spratlys after its expansion.

The search-and-rescue ship, described as China’s “most advanced” of its kind, is also capable of emergency medical services, firefighting and oil spill cleanups. It has a heliport that can accommodate medium-sized rescue helicopters, the report said.

“China’s construction work on the Nansha (Spratlys) Islands and reefs aims not only to improve the lives of people stationed there and enhance their ability to cope with maritime security threats, but also to increase public services in the region,” Foreign Ministry spokesperson Geng Shuang was quoted as saying.

The presence of China’s ships in the Spratlys is not new. China’s missile-equipped warships and coast guard vessels have been regularly sighted around its seven man-made islands since 2017, based on satellite and surveillance images.

“The deployment of a search and rescue ship is a grey zone tactic,” Dr. Jay Batongbacal, director of the University of the Philippines Institute for Maritime Affairs and Law of the Sea told Inquirer.net.

In a report for the Department of State last year, the International Security Advisory Board defines “grey zone” as “the use of techniques to achieve a nation’s goals and frustrate those of its rivals by employing instruments of power—often asymmetric and ambiguous in character—that are not direct use of acknowledged regular military forces.”

With this tactic, Batongbacal explained “it allows China to permanently deploy assets in Spratlys without appearing to be directly threatening, avoid protest, and ostensibly as a public good.”

“At the same time, it provides an excuse for continuous surveillance and monitoring of all maritime activities that might require search and rescue,” he said, adding that the deployment would also be used “to demonstrate administration of the area as a regular part of its territory.”

The maritime expert also warned that this deployment is “the pretext for a stronger presence so close to our largest island.”

Mischief Reef, locally known as Panganiban Reef, is within the Philippines’ exclusive economic zone that was seized and controlled by China since 1995.

China insists that the facilities in its man-made islands in the Spratlys are primarily for civilian purposes despite the recently reported deployment of missile launchers and radar- jamming equipment.

Analysts say that the missile shelters, runways, ports, aircraft hangars built in recent years make it appear that these islands are military installations and definitely not for civilian use.

The bitterly contested waterway is also subject to territorial claims from the Philippines, Vietnam, Malaysia, Taiwan and Brunei.