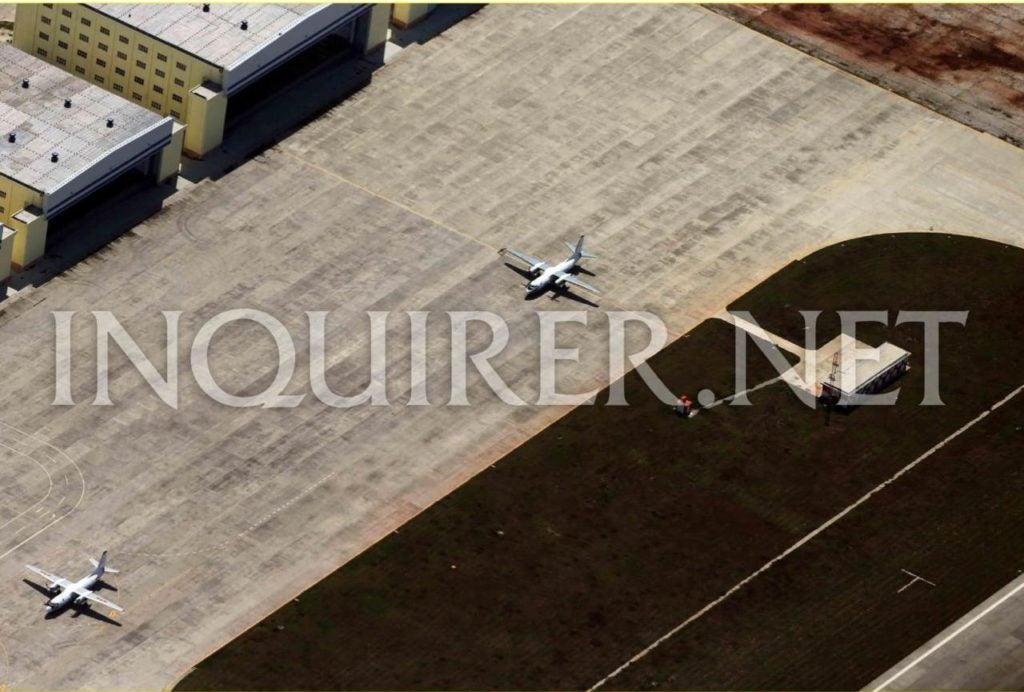 CONFIRMED. Earlier in April, the Inquirer reported the presence of two Xian Y-7 aircraft on Panganiban Reef, as shown in surveillance image taken on January 6, 2018. A close-up examination of the image shows the insignia of the People’s Liberation Army Air Force, confirming the aircraft were military planes. (SOURCE)

Chinese warships and aircraft have been frequenting Philippine territory in the Spratly archipelago since 2017, indicating a steady pace of development toward “operational status” of Beijing’s military bases in the hotly contested South China Sea.

Missile-equipped vessels were seen last year near Philippine reefs in the Spratlys, which China had turned into artificial islands.

A Type 056 Jiangdao-class guided-missile corvette was spotted at Zamora on Jan. 14 this year.

Chinese Coast Guard ships, amphibious and sea transport vessels had also been spotted by air patrols in the region. 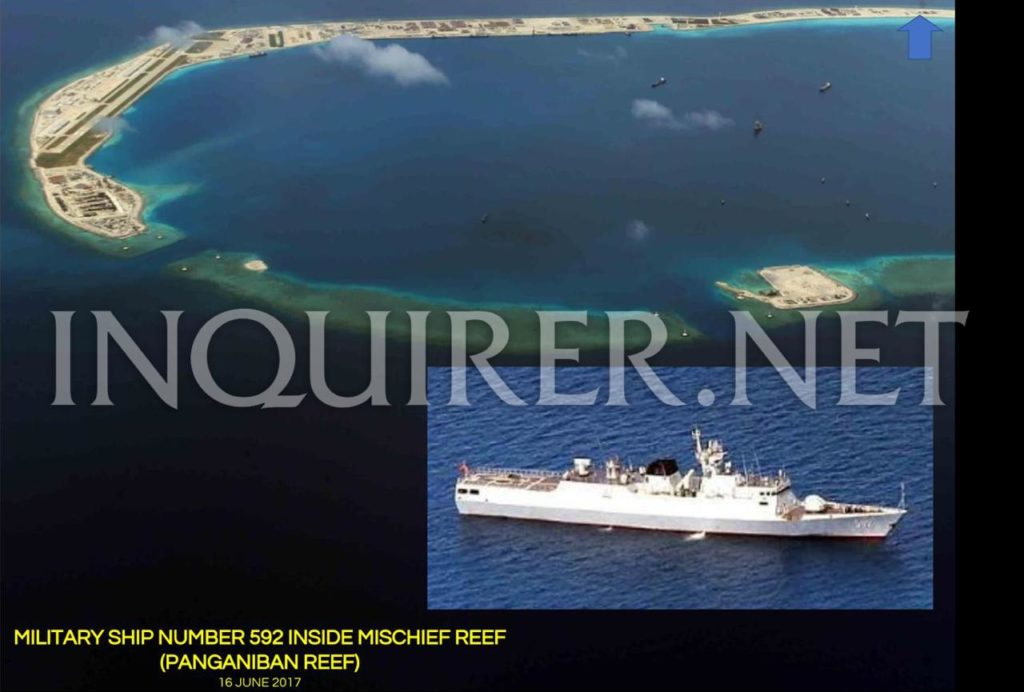 “Some of the ships were probably meant to provide security to the continued development of the island and its facilities, to try to discourage any curious ships and aircraft from coming too close, and even prevent any unwanted visitors from landing on the artificial islands,” said Jay Batongbacal, director of the University of the Philippines Institute for Maritime Affairs and Law of the Sea.

“Other ships were probably using the artificial islands as resupply bases for long voyages and patrols,” Batongbacal said.

Earlier in April, the Inquirer reported the presence of two Xian Y-7 aircraft on Panganiban, shown in surveillance image taken on Jan. 6.

A closeup examination of the image showed the insignia of the People’s Liberation Army Air Force, confirming the aircraft were military planes.

But what really worried Southeast Asian claimants to territory in the South China Sea were the April 9 report of The Wall Street Journal that China had installed military jamming equipment on Panganiban and Kagitingan (Fiery Cross) reefs and CNBC’s May 2 report that Beijing had deployed antiship cruise missiles and surface-to-air missile systems on Kagitingan, Zamora and Panganiban. 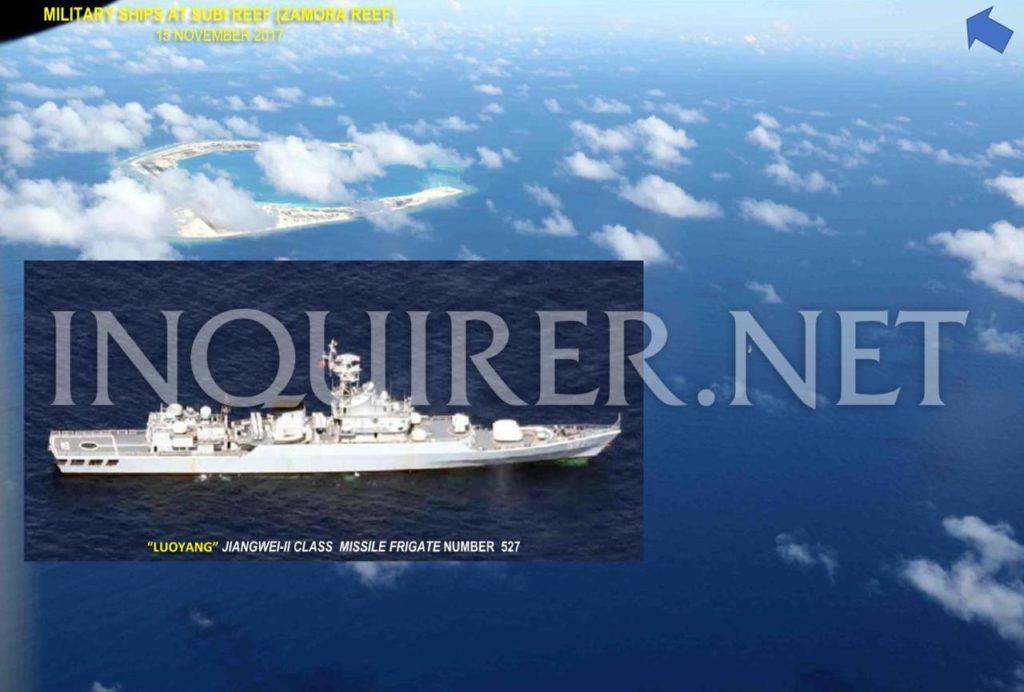 “All these are incremental steps toward full operational status of these military bases,” Batongbacal said.

Most alarming was the deployment of Chinese high-tech weapons on Philippine territory, but Malacañang said last week that it was still trying to verify the report.

The Department of Foreign Affairs said it was taking the report seriously, but the DFA had not stated what it intended to do.

Batongbacal described the Duterte administration’s response as an “incredibly weak excuse” to justify its position of not protesting the developments “out of fear that it might elicit an adverse reaction from China.”

President Duterte has put aside a 2016 ruling in favor of the Philippines of the Permanent Court of Arbitration in The Hague that invalidated China’s claim to 90 percent of the South China Sea in exchange for aid, loans and investments from Beijing.

“The [military] is not so lacking in competence that it cannot even analyze reconnaissance photographs from ship, [airplane] or satellite, nor is it without other resources of information from allies and friends . . . It is actually insulting to think that the [military] cannot even verify such matters,” Batongbacal said.

He said there was nothing more to verify after China had admitted the missile deployments.

“Its answers to two pointed questions separately made and recorded in separate [Chinese Ministry of Foreign Affairs] briefings do not deny them, and even refer to them as ‘the relevant deployment,’” he added.

The Philippine military, however, said on Monday that it was still verifying the missile deployments.

“We are coordinating with our counterparts and we are still validating the issue,” said Gen. Carlito Galvez, chief of staff of the Armed Forces of the Philippines.

Galvez gave assurance that the military was doing its best to protect Philippine territory but he would not give specifics. 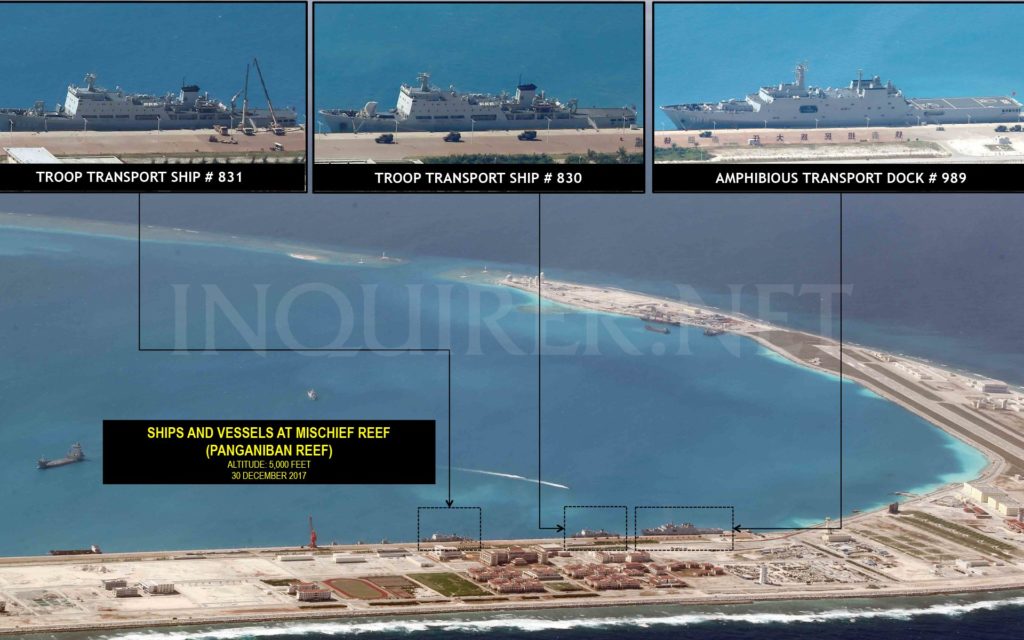 The Senate opens an inquiry into the missile deployments when it resumes sessions on Tuesday.

Collin Koh, a research fellow at Rajaratnam School of International Studies’ Maritime Security Program, told the Inquirer that the capability deployment pattern should have been long expected.

“This is a gradual, creeping addition of increasingly high-powered capabilities to those Chinese-occupied features. It’ll appear that Beijing is ready to up the ante by beefing up its defenses [on] those artificial islands,” Koh said.

“When Beijing built such high-value installations as enormous airstrips replete with shelters and possibly bunkers, as well as sizable ports with huge ship berthing spaces, it’s a matter of time it will beef up the preexisting short-range defenses such as close-in weapons systems with [long-range] ones,” he said.

Koh said the “defensive preparations” may be part of China’s measures to assert sovereignty over the contested region, including sea patrols and aerial surveillance using fighter jets and bombers.

In time, China may use its capabilities for offensive operations, he said.

“These long-range systems would allow China to actively challenge foreign military activities within their engagement envelopes, deterring against any undesired moves by the latter,” he added.

Koh viewed the Duterte administration’s usual response as “a purposeful attempt to [play down] the issue” in order not to “rock the boat” with China. 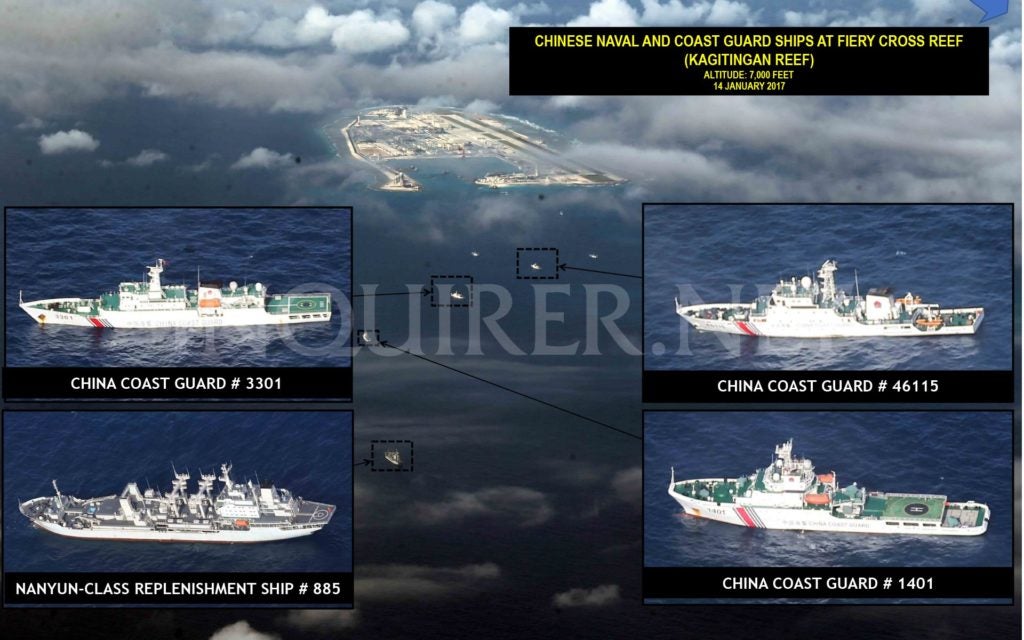 Both Koh and Batongbacal criticized the Duterte administration’s statement that it was “confident” that China’s missiles were “not directed” toward the Philippines because of the improved relations between the two countries.

“Manila may say that when ties are rosy. But when ties turn sour, which can [happen] overnight without warning, those missiles would still remain there to threaten Philippine interests in the South China Sea,” Koh said.

“Moreover, the missile deployments and the very characteristics of these systems pose a direct challenge [to] Manila’s ability to resupply or reinforce [its] outposts in the Spratlys such as Thitu [Pag-asa] Island,” he said. “Any plane [flying] out of Palawan [to] that very outpost can be easily interdicted by those Chinese missiles deployed [on] those artificial islands.” —With a report from Jeannette I. Andrade