Gov’t ‘neglect’ of PH outposts ‘not fair’ to soldiers — expert 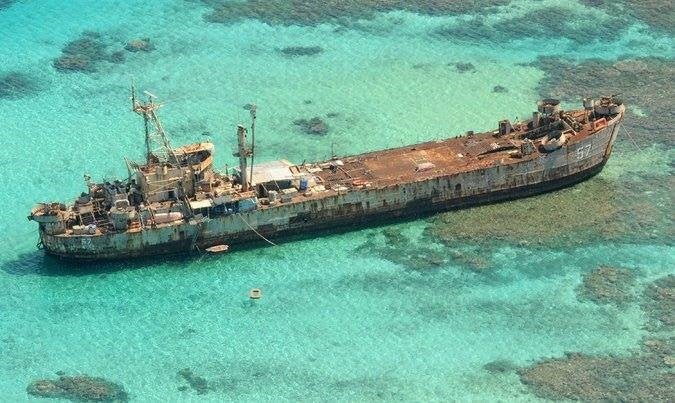 The BRP Sierra Madre sits on Ayungin Shoal as a symbol of Philippine presence and claim over the marine feature in the South China Sea. INQUIRER FILE

The lack of significant upgrade on Philippine-held detachments in the Spratly Islands in the South China Sea is ‘not fair’ to soldiers stationed there, a security expert said Tuesday.

“It is not fair to our AFP [Armed Forces of the Philippines] in hardship posts in Kalayaan Island Group and Ayungin Shoal that the government is hardly upgrading our facilities there, yielding to China’s objections,” former National Security Adviser Roilo Golez told Inquirer.net.

President Rodrigo Duterte has stressed that he was avoiding an armed conflict with China because it could lead to a “massacre” of Filipino soldiers, who are poorly armed compared to their Chinese counterparts.

Each of the outposts is manned by a small group of Marines, who serve three-to-six-month tours of duty.

The planned P1.6-B development of Pagasa Island had been stalled for over a year over unspecified reasons after it has been announced.

Pagasa has a 1.3-kilometer dilapidated runway that badly needs an upgrade. It also lacks a port for visiting vessels.

The rusting vintage ship, BRP Sierra Madre in Ayungin Shoal, is in a poor condition. The rest of the country’s facilities in the Spratlys also need major improvements.

As China continues to build structures and equip their artificial islands with advanced military capabilities, other claimants like Vietnam, Taiwan and Malaysia have been upgrading their outposts, although not as massive as the Asian giant. The Philippines lags in making upgrades.

Duterte’s peace overtures with Beijing has also led to greater economic and political cooperation between China and the Philippines.

“It seems we are overdoing our act not to antagonize China by not reinforcing our facilities in the KIG,” Golez said.

Defense analyst Jose Antonio Custodio said that the Philippine facilities in a “high tension environment” like the Spratlys must be improved “to allow for greater survivability in matters of stocked supplies, defenses and logistic capabilities” in case of “any eventuality such as hostile incidents or even natural calamities.”

Among the latest major developments in the Spratlys include China’s deployment of missiles in three of its biggest man-made islands in recent weeks, which has raised concerns of several nations like the Philippines and US.

“Now, given that China has upped the ante by deploying missiles to the West Philippine Sea it becomes imperative to increase our defenses as this deployment has run counter to previous Chinese claims of not further militarizing the area,” he said.

“China’s display of bad faith makes it more imperative to be vigilant and to allow our forces the capability to respond to the current and future Chinese intimidation and threats such as blockades,” Custodio added.

‘Resolve in the face of China’s intimidation’

Jay Batongbacal, director of the University of the Philippines Institute for Maritime Affairs and Law of the Sea, said the improvements in KIG may also serve a “symbolic purpose.”

“[It’s] demonstrating resolve even in the face of China’s intimidation. To do nothing would be to signal that we concede the South China Sea to China,” he said.

He added that an upgrade of the country’s detachments similar to its Southeast Asian neighbors won’t be considered a violation of any agreement. The developments won’t also include reclamation activities.

The government on Tuesday denied that the Philippines is lagging behind its rival claimants in the Spratlys.

“If they’ve overtaken us in asserting their rights and sovereignty, I dispute that,” Presidential spokesperson Harry Roque said.

In April, Foreign Affairs Secretary Alan Peter Cayetano said that the Philippines is not building up its defenses in the Spratlys because they would rather spend the budget on education or health.

The government is facing criticisms for supposedly being submissive to China in exchange for loans and other economic investments.

“The Duterte administration has chosen to openly side with China and abandon with all the pretensions of protecting Philippine interests in the West Philippine Sea area,” Custodio said.

Golez said that Vietnam, which has turned out to be the most vocal of Southeast Asian countries on China’s activities in the disputed waterway, has demonstrated that “a good defense capability build up is not incompatible with a vibrant economy.”

Both China and Vietnam maintain economic ties but the latter remains to be vocal against the Asian superpower’s aggressive activities in the South China Sea.

“The message: Be not timid in facing China,” Golez said.