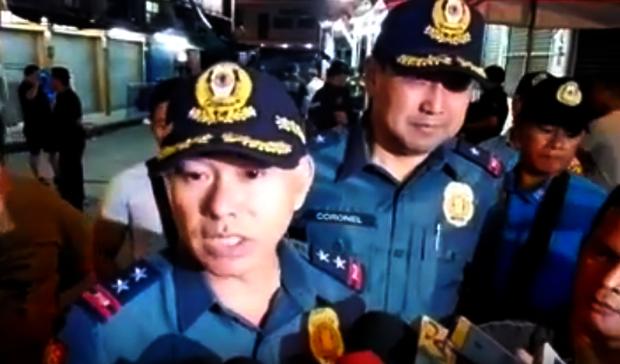 Director Oscar Albayalde, NCRPO chief, talks to reporters at the site where a bomb exploded in Quiapo, Manila on May 6, 2017. (Photo from a Radyo Inquirer video)

The National Capital Region Police Office (NCRPO) has started monitoring the communist urban hit squad Alex Boncayao Brigade (ABB), some members of which might have converted to Islam and might pose a threat to the 50th Asean Ministerial Meeting (AMM) and Post-Ministerial Conferences, which takes place from Aug. 2 to 8 in Metro Manila.

In a press briefing at Malacañang on Tuesday, Director Albayalde, NCRPO chief, said police had not monitored threat from the Maute terrorists, but it was monitoring possible threats from the ABB members.

“As of this time, so far wala naman tayong nakukuhang threat, although we are monitoring all these critical areas, ’yung mga enclaves na sinasabi rin natin ’no at we are monitoring some groups who are actually present here in Metro Manila, who are Balik Islam and other former members of the ABB, who suspectedly nag-Balik Islam,” Albayalde said.

“So these are all being monitored in relation to this meeting,” he added.

“We have monitored a few of them who converted into Balik Islam,” Albayalde said, referring to the ABB.

But for now, the police had not detected movement from the ABB.

“As of this time, wala naman tayong namo-monitor na movement nila that would probably disrupt this Asean meeting,” Albayalde said.

He downplayed the threat as coming from only a “few people” who might be consolidating in certain “critical areas” – such as the Muslim enclaves in Maharlika Village in Taguig and in the districts of Quiapo and Tondo (specifically, the Baseco Compound) in Manila.

“There are just a few people lang naman ito. (They are) continuously being monitored by our intelligence operatives, both from the Armed Forces of the Philippines and the Philippine National Police,” Albayalde said.

“Although wala naman tayo talagang namo-monitor,” he added. “But then again, we have to conduct these target-hardening measures to prevent any untoward incident for this Asean meeting.”

Albayalde also cautioned against connecting the presence of these communist assassins in Metro Manila to the Asean meetings.

“Hindi naman most probably related sa Asean ang gagawin nila,” Albayalde said. “But what we’re avoiding here is any incident even outside the venue or even outside dito sa Parañaque or Pasay kung saan.”

“Like what happened before doon sa Quiapo,” he added. “Then people would always relate things that would happen outside the venue doon sa Asean. So ‘yun ang iniiwasan natin… Ayaw kasi natin magkaroon ng isang incident that people would probably relate to the ongoing Asean.”

The Asean foreign ministers are expected to tackle measures to counter terrorism and violent extremism, at a time the Philippine troops are battling with Maute terrrorists in Marawi City. /atm

Read Next
Code of conduct framework may not cite UN sea ruling – DFA exec
EDITORS' PICK
Pimentel: Gov’t buyers knew of cheaper laptops but still got expensive ones
A laptop that maximizes your WiFi so you can maximize your productivity
House starts inquiry into sugar import mess
House energy committee chair Arroyo bats for cheap electricity
Powered by style, innovation and passion
‘Opportunity’: PH senior population on the rise
MOST READ
Imee Marcos bares illegal importation of white onions
Pimentel: PS-DBM knew of cheaper laptops but still got expensive ones
U.S. actor Anne Heche is taken off life support 9 days after car crash and dies
Is appointment of Comelec chair constitutional?
Don't miss out on the latest news and information.