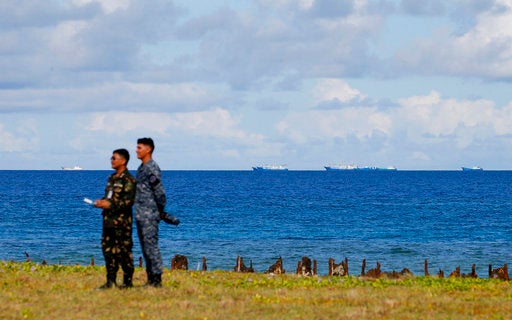 Philippine military officers operate their drone amidst the presence of Chinese ships seen in the background during the visit of Defense Secretary Delfin Lorenzana, Armed Forces Chief Eduardo Ano and other officials at the Philippine-claimed Thitu Island off the disputed South China Sea in western Philippines Friday, April 21, 2017. The trip led by Lorenzana on an air force C-130 aircraft to the island Filipinos call Pag-asa will likely infuriate China, which has claimed virtually the entire sea and aggressively tried to fortify its foothold, to the consternation of rival claimant governments and the United States. The South China Sea issue is expected to be discussed in the 20th ASEAN Summit of Leaders next week. (AP Photo/Bullit Marquez)

The United Nations arbitral ruling, which favored the Philippines diplomatic protest against China over the West Philippines Sea, may not be mentioned  in the framework of the Code of Conduct (COC) of Parties in the South China Sea, a foreign affairs official said on Tuesday.

The Department of Foreign Affairs spokesperson, Robespierre Bolivar, said the framework would most likely be “generic.”

“I would think it’s something more generic so there’s no specific mention [of the arbitral ruling],” Bolivar told reporters in Malacañang.

“(T)he general headings, kumbaga parang balangkas, it’s an outline, the nature of the code of conduct, what principles govern the behaviors of [the nations],” he added.

The Association of Southeast Asian Nations (Asean) foreign ministers and China would formally endorse the document called “Framework of the Code of Conduct in the South China Sea,” during their meeting in Manila on August 6.

“After the endorsement, approvals process has been dealt with, we expect that the talks on the actual Code of Conduct will begin in earnest,” Bolivar said.

The foreign official said the Philippines would push for the interest of the country during the talks.

“Anything to our interest, of course, we will push,” he said.

Bolivar said Asean and China are committed to come up with an effective code of conduct.

“Now what we’re trying to achieve is more than just binding, it’s an effective code of conduct. ‘Yung talagang irerespeto at susundin ng lahat. We’re hopeful, because of the commitment between the Asean and China, na unang-una, we finish the framework ahead of time,” he said.