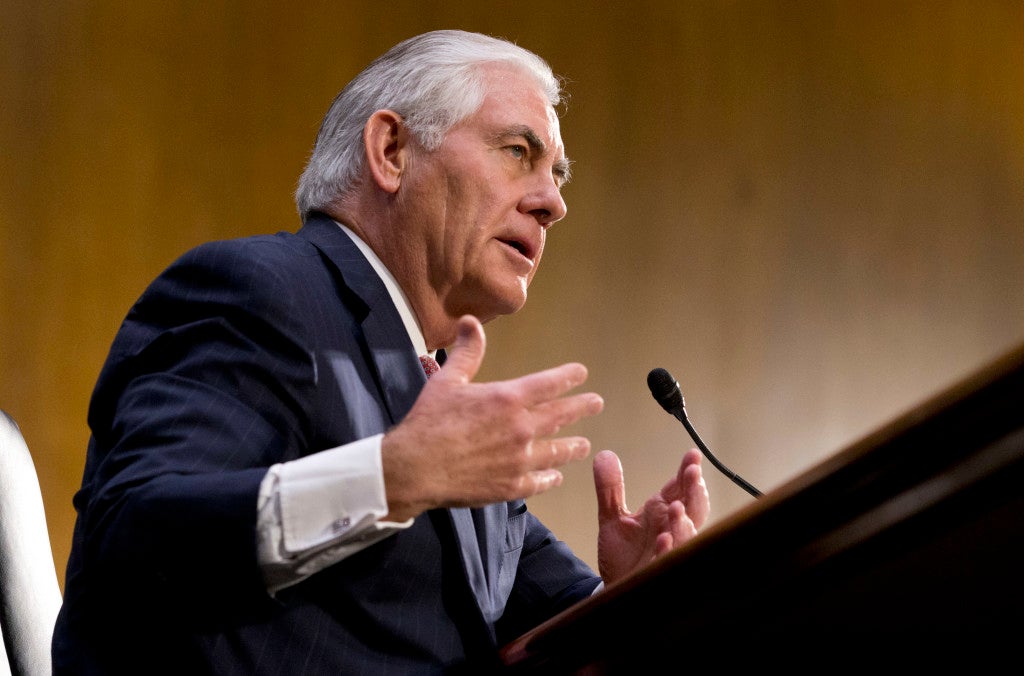 United States Secretary of State Rex Tillerson will lead the foreign ministers who will attend the 24th Asean Regional Forum (ARF) retreat and plenary to be held on August 7 at the Philippine International Convention Center (PICC).

In a press briefing at Malacañang on Tuesday, Foreign Affairs spokesperson Robespierre Bolivar said it is “normal” for foreign ministers, including the US Secretary of State, to meet with the chairperson of the Asean. The Philippines is chair of this year’s Asean summit.

“It’s normal for visiting foreign ministers to meet with the chair of Asean,” Bolivar said.

The US will participate in the ARF as a member of the participating countries.

Bolivar said he has yet to confirm if TIllerson and Cayetano will talk in a bilateral meeting at the sidelines of the Asean foreign ministers’ meetings.

“As of this point, we are still fixing the schedule of bilateral meetings. As soon as we have something confirmed, we’ll share it with you,” Bolivar said.

Albayalde said the police has deployed 13,000 uniformed personnel with 1,286 attached personnel from other agencies, to secure the foreign ministers and other delegates who will be arriving.

“Twenty-four delegates from some countries have already arrived. We have deployment in some billets in some hotels,” Albayalde said.

The police will also secure the Aug. 8 parade for the ceremonial lighting of the Asean lantern that would run from the kilometer zero in Rizal Park to the Cultural Center of the Philippines.

“We have made walkthroughs since yesterday with the other security officers of Asean Ministers. And I think with all the preparations that we’ve made, the country is very much ready to host this 50th Foreign Ministers’ Meeting,” Albayalde said.

During the ARF retreat, foreign ministers and representatives of ARF participating countries are expected to exchange views on the tensions in the Korean peninsula, terrorism and violent extremism, human trafficking and trafficking in illicit drugs, natural disasters, among others.

The ARF retreat would be followed by the ARF plenary, where the foreign ministers will discuss the adoption of the List of Track 1 Activities for the Inter-Sessional Year 2017-2018, as well as proposed ARF statements in addressing the drug problem, and on the prevention of illegal, unreported, and unregulated fishing.

Cayetano would lead the 10 foreign ministers from the Asean region who would attend the ARF:

The ARF foreign ministers from participating countries are: